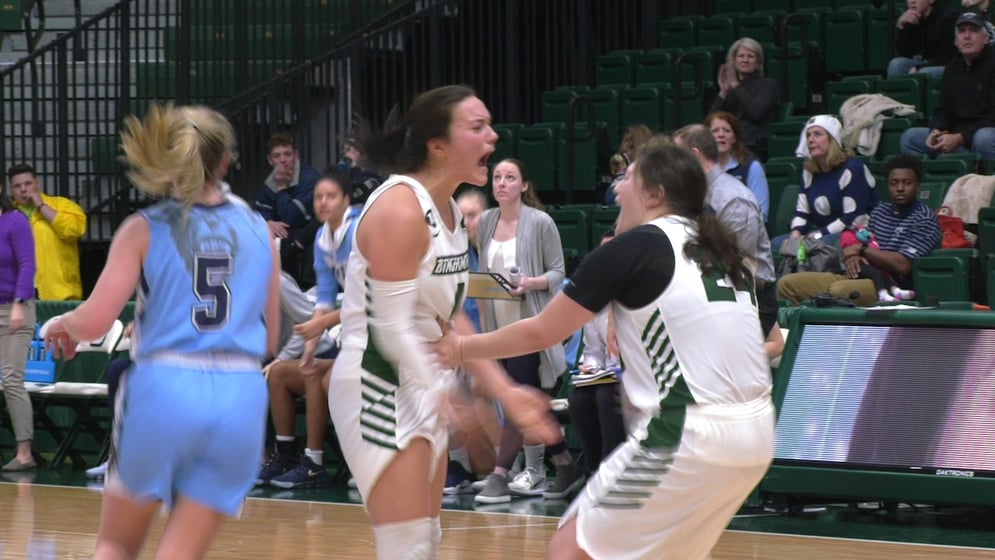 VESTAL, N.Y. – Senior guard Kai Moon scored a team-high 26 points and junior forward Olivia Ramil added 16 points, powering Binghamton (13-5, 2-3 AE) to a 73-63 win over Maine (7-10, 3-2 AE) in an America East women's basketball game on Saturday afternoon at the Events Center. The victories snaps the Bearcats' two-game losing skid and puts them ahead of last year's 12 wins for the season.

Moon went 8-for-16 from the field and sank five of her 10 three-point field goal attempts. She also led the team with seven rebounds and added three steals.

Ramil, meanwhile, was 4-of-6 from the field and made all eight of her free throw attempts. Also reaching double figures in scoring was sophomore forward Annie Ramil, who finished with 12 points.

It was the fourth quarter of the game that proved decisive. The Bearcats trailed 43-42 at the outset but reeled off 29 points, its highest scoring total of the season. Binghamton shot 64 percent during that stretch (9-for-14), went 3-for-5 from three-point range (60 percent) and made all eight of its free throw attempts.

"I thought we did a great job," head coach Bethann Shapiro Ord said. "I am really proud of this group for gritting it out. When we stuck to what we do best defensively, that is when things opened up for us. We had to tighten things up in the fourth period and we were able to finish the game strong."

The Bearcats broke a 61-61 tie with six straight points in a span of 1:08 to go up 67-61 with 39 seconds left in regulation. Maine trimmed the deficit to 67-63 on a jumper by Anne Simon at the 31-second mark but Binghamton ended the game with six consecutive free throws to ice the game.

For Maine, the loss overshadowed a 28-point, 11-rebound performance by Simon. In the process, she went 12-of-18 from the field. Maeve Carroll added 13 points and Kelly Forgarty chipped in 10 points.

Binghamton shot 47.2 percent for the game (25-of-53). It marks its third-best percentage in a game this season. From the free throw line, the Bearcats were 16-of-18 for the game (.889), which tied their best percentage of the season. They also finished 16-of-18 against St. Bonaventure on Nov. 27

Binghamton remains home and will face Stony Brook on Wednesday at 7 p.m