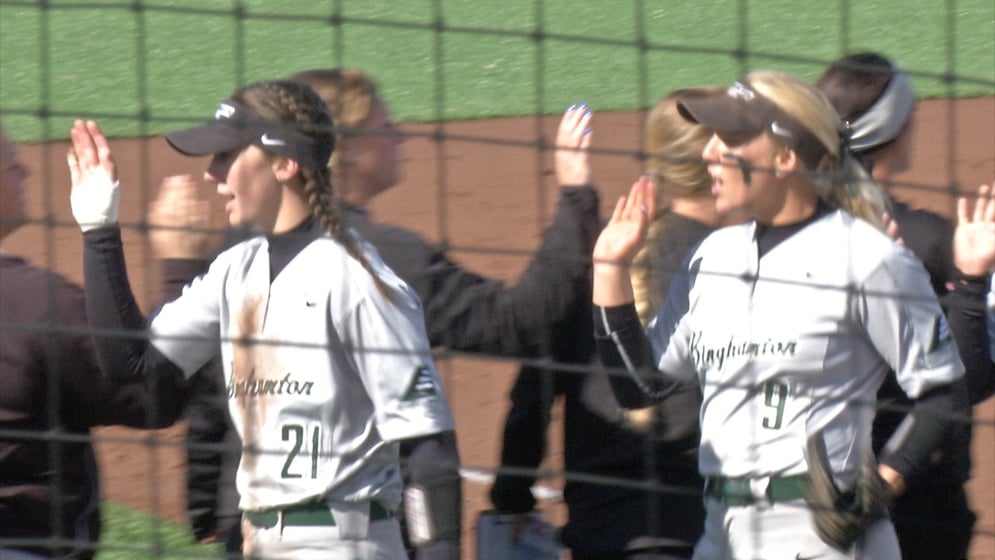 Vestal, N.Y. - Freshman outfielder Chloe Morgan drove in a team-high four runs and three of her teammates each finished with three RBI, powering Binghamton (10-12) to a 8-7, 10-1 sweep over Cornell (3-16) in a non-conference softball doubleheader on Wednesday afternoon at the Bearcats Sports Complex. The Bearcats rallied to win the first game in the bottom of the seventh inning before finishing off the finale in just five innings.

Morgan, who drove in the winning run in the first game, finished the day 3-for-6 (.500) with a pair of doubles. Junior catcher Sarah Herskowitz drove in three runs – all in the first game – as did junior designated player Rozlyn Price and sophomore catcher Hannah Lyons.

Herskowitz, sophomore third baseman Sarah Benn and junior outfielder Stephanie Ragusa all hit .500 for the day. Herskowitz went 2-for-4 in the first game, while Benn and Ragusa each went 3-for-6 during both games.

The Bearcats loaded the bases with no outs in the bottom of the seventh inning and began to mount their comeback. Herskowitz singled home a run and two batters later, junior pinch hitter Kassidy Seary deadlocked the game with a RBI single. The set the stage for Morgan's game-winning base hit.

Freshman pitcher Morgan Bienkowski improved to 1-4 with the win while Ashley Delany fell to 2-3 with the loss.

In the nightcap, the Bearcats broke a 1-1 tie with eight runs in the bottom of the seventh inning. Price delivered the big blow with a three-run home run. Two batters later, Lyons clubbed a two-run home run. Also during the frame, Morgan and Benn belted RBI doubles and Ragusa drove in the other run on a ground out.

Benn tacked on the Bearcats final run in the bottom of the fourth inning with her second run-scoring double of the game.

Junior pitcher Rayn Gibson improved to 5-5 with the victory. The loss was tagged to Katie Lew, whose record dropped to 1-8.

"We stayed composed in both games and got some key hits in both games," head coach Michelle Johnston said. "We had some big pinch hits in the first game and hit very well in the second game. It was good to use five pitchers today and given them all some midweek work."

Freshman Marissa Braito, who has been named the America East Rookie of the Week twice in a row, went 3-for-7 (.429) during the day. Sophomore first baseman Alex Guay finished 2-for-5 (.400).
As a team, Binghamton hit .412 during the doubleheader.

The Bearcats now head to UMBC for their opening America East series of the year. The two teams will play a noon doubleheader on Saturday followed by a single game on Sunday at 1 p.m.