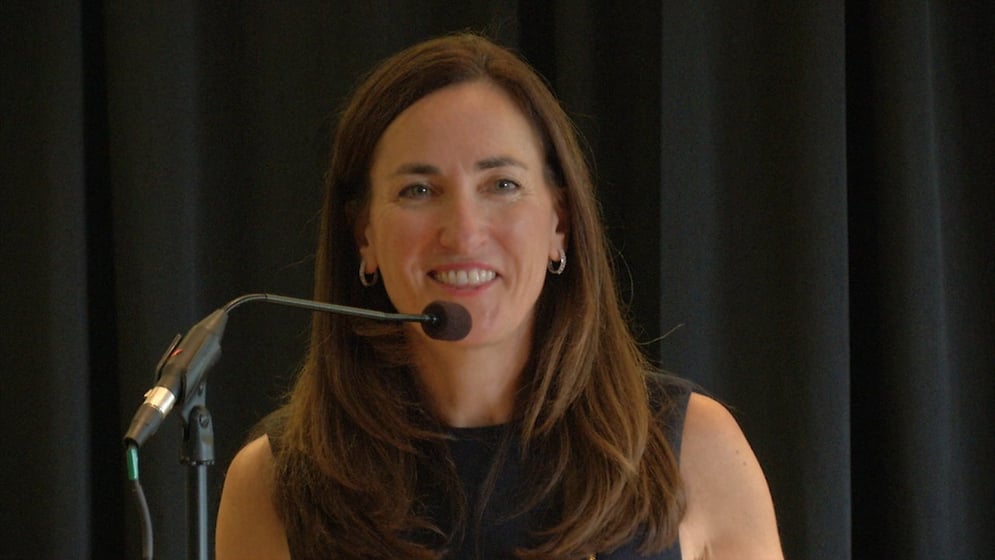 Binghamton University formally introduced Bethann Shapiro Ord as its new head women's basketball coach at a press conference on Friday afternoon in the TAU Room of the Events Center. She is the 14th head coach in the 45-year history of the women's basketball program.

Binghamton University President Harvey Stenger and Athletic Director Patrick Elliott introduced Shapiro Ord, who then spoke of her passion for joining the Bearcats.

"It's such a fantastic honor to stand before you today as Binghamton's new women's basketball coach," Shapiro Ord said. "I am really looking forward to the opportunity to coach an amazing group of young ladies. I can't tell you enough how excited I am."

Stenger and Elliott each praised Shapiro Ord as being a top-notch candidate when they began the hiring search last month.

"We are extremely excited to introduce Bethann Shapiro Ord as our new women's basketball coach," Stenger said. "Her name was at the top of the list when we knew we were facing a coaching search. She is the right person at the right time to be here at Binghamton University."

"This is huge for Binghamton Athletics," Elliott said. "When I first talked to her, it was evident that I was dealing with a very special individual. She is a proven, successful basketball coach and an even better person."

A native of Rochester (N.Y.), Shapiro Ord was the head coach at Weber State for the past seven years. During that stretch, she rebuilt the Wildcat program and steered it to a pair of seasons with at least 20 wins as well as national postseason appearances.

Under Shapiro Ord's watch, the Wildcats went 57-41 the past three years, advanced to the Women's Basketball Invitational (WBI) twice and attained the highest win total in program history (23 in 2015-16). Weber State finished this past season with a RPI of 150 out of 346 Division I programs. In the three years prior to Shapiro Ord's arrival in 2011, Weber State did not win more than 10 games.

Prior to arriving at Weber State, Shapiro Ord was an assistant coach for 22 years with several successful Division I women's basketball programs in major conferences. Most notably, she was an assistant coach at Louisville from 2007-11. During that time, the Cardinals advanced to the Sweet 16 three times as well as the 2009 national title game.

A 1989 graduate of UMBC, Shapiro Ord began her coaching career as an assistant at Nazareth during the 1989-90 campaign. She then spent two seasons as a graduate assistant at Wagner (1990-92).

She married Jim Ord in 2003. He joined Bethann at Friday's press conference along with her parents, younger sister and two nieces.