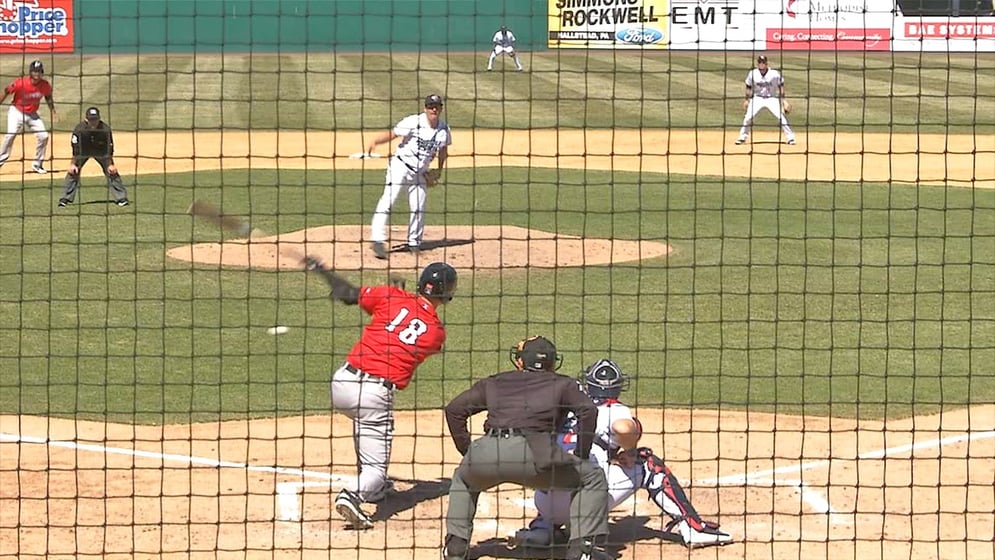 A five-run third inning sent the Erie SeaWolves past the Binghamton Rumble Ponies, 7-3, Sunday afternoon at NYSEG Stadium. As they did in the first two games of the series, the SeaWolves were first on the scoreboard. Binghamton, though, outscored Erie 11-10 during the three-game set.

On Sunday afternoon the SeaWolves greeted first-time Rumble Pony Michael Gibbons by plating five runs on four hits in the third inning. Shortly after Sergio Alcantara’s single, Dominic Ficociello reached on Jeff McNeil’s error, knocking Gibbons out of the game. Facing Johnny Magliozzi, Gabriel Quintana drew a five pitch walk to load the bases. Jake Rogers started the merry-go-round, singling home Alcantara to break the seal, 1-0. A.J. Simcox would follow by hitting a slow grounder to shortstop; Binghamton got the out at second but McNeil’s turn to first sailed over Peter Alonso, allowing two runs to cross. Already ahead 3-0, SeaWolves’ Harold Castro and Jacob Robson would each collect RBI singles to make it 5-0 Erie.

Gibbons (0-1) lasted 2.1 innings in his second-ever Double-A start and first since 2015. He allowed four hits and two runs (both unearned), before giving way to Magliozzi.

Tyler Alexander (2-0) twirled the first five innings without allowing a run. The southpaw gave up five hits, had five strikeouts, and walked none.

The Rumble Ponies would collect the game’s next three runs, doing so off of Erie’s bullpen.

A trio of doubles from Alonso, Kevin Taylor, and Nick Sergakis earned Binghamton a two-run sixth inning, slicing the deficit to three.

The Erie advantage was cut to two in the eighth inning behind hits from Matt Oberste and Jhoan Urena. Oberste’ one-out single set up Urena’s two-out double, making it a 5-3 game.

That’s as close as Binghamton would get as Erie utilized a pair of insurance runs in the ninth inning off of Ponies reliever Adonis Uceta.

Binghamton (6-8) continues its six-game homestand by welcoming in the New Hampshire Fisher Cats on Monday night. First pitch at NYSEG Stadium is slated for 6:35 PM. The Horizons Federal Credit Union pregame show starts at 6:20 PM and can be heard on NewsRadio 1290 WNBF and the Binghamton Rumble Ponies channel on TuneIn.

POSTGAME NOTES:Nick Sergakis (1-for-3, 2B, RBI) played his first game of the season…Binghamton allowed a season-worst 15 hits…Michael Gibbons only other Double-A start came against Erie in 2015