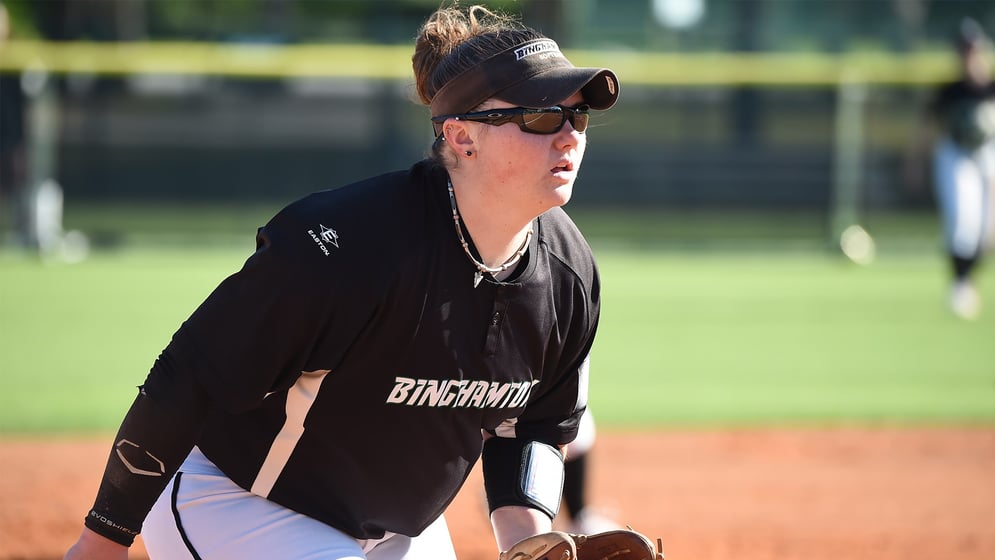 HAMILTON, N.Y. – Binghamton (7-12) split a non-conference softball doubleheader at Colgate (5-21) on Monday afternoon at Eaton Street Field. The Bearcats defeated the Raiders 5-4 in the first game but lost the finale 3-1.

Senior third baseman Kate Richard homered and drove in three runs. She went 3-for-7 during the day (.429) and extended her hitting streak to eight games.

Senior outfielder Jessica Rutherford finished 3-for-6 (.500) with a triple and a pair of RBI. Freshman shortstop Mikalya Alvarez, meanwhile, was also 3-for-7, hit a pair of doubles and scored three times.

Alvarez led off the first game with a double and scored one batter later on a single by senior second baseman Jillian Bovitt. Two batters later, Richards doubled home Bovitt to make the score 2-0.

Colgate got an unearned run back in the bottom of the first inning but Rutherford single home Alvarez I in the top of the second inning, padding the lead to 3-1.

With the Bearcats nursing a 3-2 lead, Rutherford smacked a one-out triple in the top of the fifth inning. She scored one batter later on a bunt single by Richard.

After Colgate pulled to within 4-3, Alvarez led off the top of the seventh inning with her second double of the game. Two batters later, she scored on a sacrifice fly by Rutherford.

The Raiders got to within 5-4 in the bottom of the inning but left the tying run on third base when the game ended.

Sophomore pitcher Rayn Gibson won her third straight decision, improving her record to 3-5. She surrendered just one unearned through six innings and struck out six batters.

Junior pitcher Makenzie Goluba came into the game in the seventh inning and recorded her first save of the year. The loss was tagged to Kylie Griswold, who is now 1-8.

Richard provided the only Binghamton offense in the second game, belting her team-best fifth home run of the season in the top of the sixth inning. Heading into that at-bat, however, the Bearcats already trailed 3-1.

Binghamton could only muster five hits and reach base six times during the nightcap.

Bella Crowe went the distance to improve to 2-9 on the season. Sophomore pitcher Rozlyn Price also tossed a complete game, but her record fell to 3-6.

Senior outfielder Carrie Maniccia finished the day 2-for-5 (.400). She now has a career-high, five-game hitting streak.

Binghamton travels to Fordham on Tuesday for a 3:30 p.m. single game.

NOTES: Richard's eight-game hitting streak ties her career-high, which she set from April 21-30, 2016. She has also now reached base safely in 10 straight games … for her career, Richard has 32 career home runs and remains in fourth place all time in program history. Her 127 RBI ranks third all time … Rutherford extended her program record to 198 career hits.