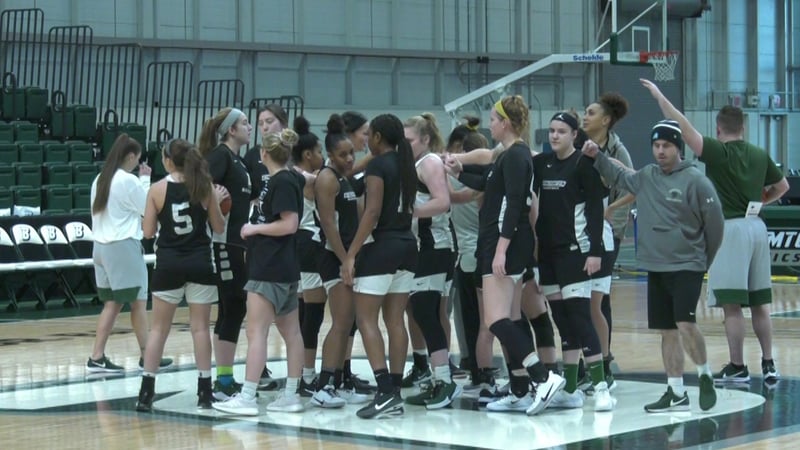 After a historic non-conference portion of the schedule, it's finally time for America East play. The Bearcats just topped off their best non-conference performance since becoming a Division I program in 2001 by going 11-2. They remain a perfect 6-0 at home. Only Stony Brook posted a better record in the America East thus far with a 12-1 mark. Head Coach Bethann Shapiro Ord says that they team certainly impressed in non-conference play, but this is when they really need to bring their A-game.

"I mean this is what you play for.," says Coach Ord. "This is the grind time. It will be for the other teams too. Maybe other teams didn't have such a great non-conference season and their coaches are telling them this their opportunity. So we don't take anyone lightly."

Senior Guard Kai Moon has led the way all season for the Bearcats. She sits in 10th in the Nation in scoring, dropping 21.4 points per game. Moon says for conference play they need to bring their level of play up a notch.

"This is really where you got to give it your all," says Moon. "You got to be locked in and focused, you're playing teams twice now. Other teams are familiar with a lot of the girls on our team and obviously they're going to watch films on the new ones. This is when it gets a lot more intense so you have to elevate your play to another level."

Last season the Bearcats went 7-9 in Conference play, good for 5th in the America East and was bounced from the conference tournament in the quarterfinals by Albany. Moon and Coach Ord are exited for the challenge of opening up America East play Sunday on the road at rival Albany. Binghamton has lost their last 19 games to the Great Danes with their last victory coming by one point in February of 2011. It's safe to say that it's important to the team to end that streak.