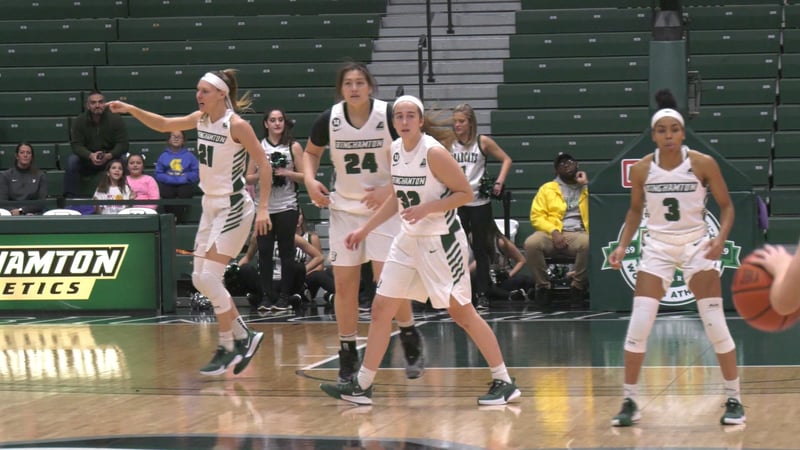 The 8-0 Bearcats were featured last week in an article on the NCAA's website that highlighted 5 under the radar teams in Women's college basketball. Out of the 351 teams in Division I Women's college basketball, BU is one of 18 teams still undefeated and one of only 5 to do so after playing at least 8 games thus far. Senior Guard Kai Moon who ranks second in the nation in scoring, continues to reel in the accolades winning her 3rd America East Conference Player of the Week of 4 given out this season. However she would be the first to tell you this is a very deep Bearcats squad getting contributions from all over the court. One of those key contributors has been junior center Olivia Ramil. Ramil has been a dominant presence in the post averaging 9 point 3 points per game. She scored her career high 17 points against St.Bonaventure last week. Ramil says the big differences this season have been the full off-season to acclimate with Coach Bethann Shapiro Ord's system, and the team's trust with each other on and off the court.

"We're a really good team and we know how good we are," says Ramil. "But we're focusing forward and ya we're excited to get that national attention but like I said we're hungry. We're hungry this year and we're just keeping our eyes ahead."

Coach Ord says the early season success hasn't effected the team's drive as they continue to come everyday ready to leave it all on the court.

"One thing they all understand they have to do is worry about 2 things," says Ord. "One, they can control what they can control Only thing they can control is their effort and their attitude. And everyday not one time have I felt that we are going to take anybody lightly. From a team that might have one win or six wins they come everyday and they're hungry every game."

The Bearcats have their work cut out for them if they hope to keep their record unblemished as they travel to Cornell on Thursday and then to Miami 2 weeks from today to take on the 21st ranked Hurricanes.