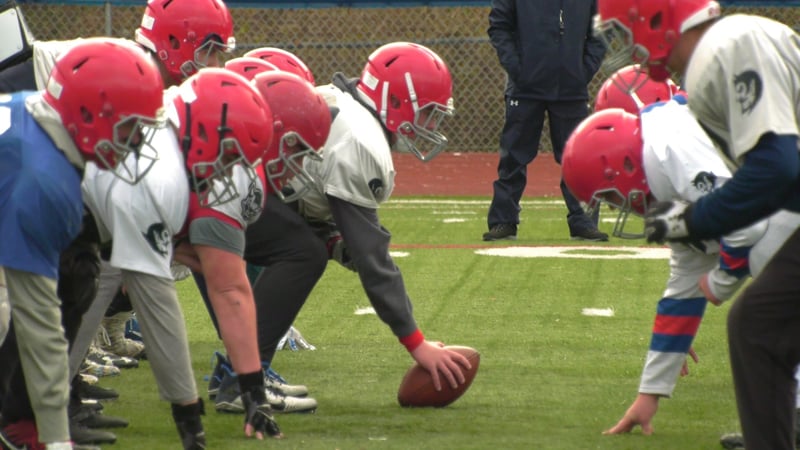 The top ranked Blue Devils took down Section 3's Solvay in convincing fashion 48-15 in the quarter-finals on Saturday. Forks head Coach Dave Hogan says they played well in all aspects of the game and it could be argued that it was their best game of the season. That performance came at the right time because they'll have their hands full with Section 6 Champion the Western New York Maritime Charter and Health Science Falcons.

"They're very very talented," says Hogan. "They talented got a lot of foot speed, it's the biggest offensive line we've faced all year. That coming from me we got a pretty big offensive line too. They have a lot of kids that can score from anywhere on the field so the plan is to not let them get started."

Looking at it from the Falcons perspective, one thing that's going to stick out on the tape is Blue Devils running back Lucas Scott. Scott continued his dominant season with over 200 yards on the ground and 4 touchdowns against Solvay. Scott and Hogan say despite the attention, they have to stick to their gameplan.

"Here's the thing it's pretty tough to bring him down as everybody knows," says Hogan. "But he has some really tough blockers up front and he'll be the first to tell you that. We got bodies on bodies. Our backs block well too not just our lineman. That makes for a good combination when you got somebody close to 250 pounds, and he's quick for a 6'4" 250 pounder. It's tough on other teams."

One of those lineman paving the way for Scott, senior Hunter Gibbore, says they are focused on one united goal this week and just have to come out and set the tempo on Saturday.

"They're a tough team they can run the ball and they got some athletes," says Gibbore. "They definitely can make plays we just have to be ready for it and take it to them."

The Blue Devils and Falcons will square off Saturday at Cicero North Syracuse, kick-off is set for 3pm.