Penn State explodes in third quarter for win over Buffalo 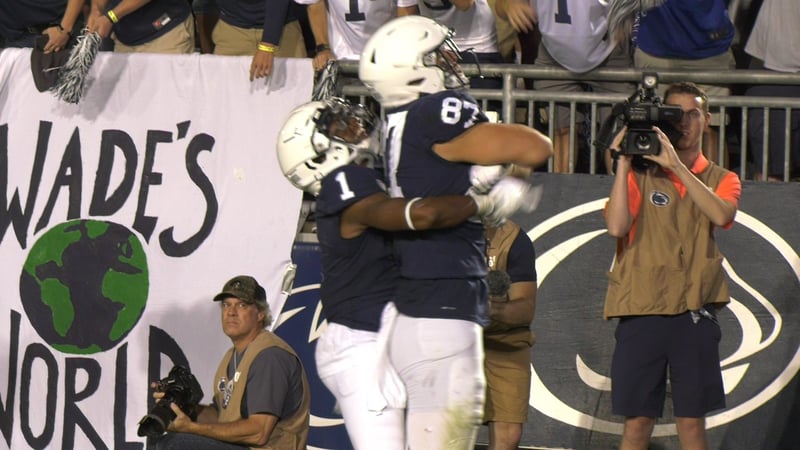 UNIVERSITY PARK, Pa. – No. 15/14 Penn State scored four touchdowns in the third quarter en route to a 45-13 win over Buffalo on Saturday night in Beaver Stadium.

Penn State (2-0) trailed Buffalo (1-1), 10-7 at the half, but cornerback John Reid (Mount Laurel, N.J.) returned an interception 36 yards for a touchdown early in the third quarter to swing the momentum in Penn State's favor. Sean Clifford (Cincinnati, Ohio) added a pair of touchdowns and Noah Cain (Baton Rouge, La.) rushed for one before the frame ended to establish a 35-13 lead.

The Nittany Lions took advantage of a Buffalo fumble for their first score. Linebacker Cam Brown (Burtonsville, Md.) caused and recovered a fumble at the Bulls’ 37-yard line. Two plays later, Clifford found Dotson in the right corner of the end zone for a 28-yard score.

Buffalo got on the board with a field goal early in the second quarter by Alex McNulty. The 32-yard kick concluded a 19-play, 69-yard drive. The drive was the longest in terms of time (8:34) since Texas A&M had an 8:45 field goal drive in the 2007 Alamo Bowl.

On the Bulls’ opening drive of the third quarter, Reid jumped a route along the left sideline and went untouched into the end zone for a 36-yard score, his first career pick-six.

After the Nittany Lions forced a three-and-out, a 22-yard punt return by KJ Hamler (Pontiac, Mich.) and a personal foul penalty set up Penn State at the Bulls’ 23. On the first play of the drive, Clifford connected with Freiermuth for his first score of the quarter.

Following a 25-yard field goal by Buffalo, the Nittany Lions answered with a 2-yard touchdown run by Cain. Cain’s run was set up by a career-long 58-yard rush along the sideline by Clifford.

The next Penn State drive ended with a 28-yard touchdown reception by Freiermuth. On fourth-and-2, Clifford found Freiermuth on a short pass to the left of the line and the sophomore took it up the sideline and into the end zone.

A 45-yard reception by Hamler set up Penn State’s next score, a 32-yard field goal by Jake Pinegar (Ankeny, Iowa), early in the fourth quarter. Later in the frame, Clifford connected by Dotson on a 56-yard touchdown to complete the scoring.