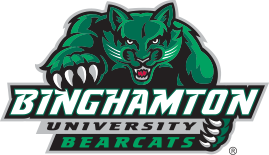 Vestal, N.Y. - VESTAL, N.Y. - The Binghamton University athletic department's Student-Athlete Advisory Committee (SAAC) held its eighth annual St. Baldrick's Foundation fundraiser and head-shaving event on Wednesday afternoon at the Old Union Hall on campus. The event, which was geared towards raising funds in support of children's cancer research, raised $7,966 for the cause.

The head-shaving event was intended to demonstrate solidarity with children who typically lose their hair during cancer treatment. In addition, individuals were able to make a donation to St. Baldrick's either before or during the event.

"The Student-Athlete Advisory Committee is tremendously proud of being in its 8th year hosting a shavee event on campus," Assistant Athletic Director Linda Reynolds said. "More importantly, we continue to make a small dent in the much needed funding for childhood cancer. I'm incredibly proud of the money that was raised this year and cannot thank Dapper Rascal Studio enough for donating their time to the event."

Since 2012, SAAC has raised over $97,000 for the life-changing organization. Among the shavees through the years have been members of the Binghamton community, BU students, student-athletes, coaches, administrators, faculty, staff and alumni.