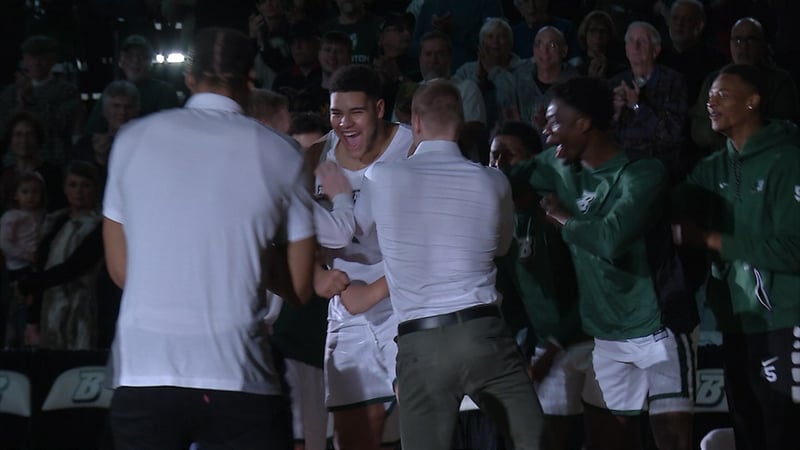 Freshman guard Sam Sessoms poured in a season-high 32 points (22 in first half) and senior forward Caleb Stewart recorded career-highs of 22 points and 16 rebounds in the loss.

After leading for more than 34 minutes in the contest and shooting well above 50 percent for most of the game, BU was caught down the stretch by the potent River Hawks, who lead the conference in scoring (81.1 ppg.).

"We had a pretty good night overall, especially on the offensive end," head coach Tommy Dempsey said. "They are the leading scoring team in the league and you have to keep scoring with them. I thought we did that for most of the night but not so well in the last few minutes. We held them to 39 percent for the game but they made big shots... you have to give them credit. It's a growing process. But we really appreciated the big crowd tonight ... it gave us energy right from the start."

Sessoms made a layup with 14:42 left that gave the Bearcats a 57-43 cushion. Binghamton then led 62-49 with 12:02 left after a Sessoms free throw. But UML embarked on a 22-9 run to tie the game at 71-71 with 4:21 remaining. Later, a three-pointer from Stewart tied the game at 75-75 with 2:57 left. But the Bearcats misfired on their next five shots and the visitors took the lead for good. UMass Lowell made seven free throws in the game's final 1:49 to seal the comeback win - their fifth straight head-to-head over Binghamton.

Sessoms made a strong run at the program's single-game scoring record of 34 points, shared by senior teammate J.C. Show and 2018 graduate Dusan Perovic. Sessoms hit 11-of-20 field goals (8-of-10 in first half), including 4-of-8 from behind the arc. His 22 points keyed a 44-point BU outburst in the opening half in front of a season-high crowd, which included 1,483 students on Pack the House Night.

The Bearcats shot 55 percent in the first half and took a 44-39 lead into the break.

Stewart tallied a double-double in the second half alone (13 pts., 11 rebs.) and his frontcourt mate Chancellor Barnard added eight points, seven rebounds and a career-high seven blocks. Binghamton, which ranks 11th in the nation in blocked shots, posted nine for the game.

Binghamton stays home to face Maine at 1 p.m. on Saturday.