Lucas Scott, Inspiration On And Off The Field 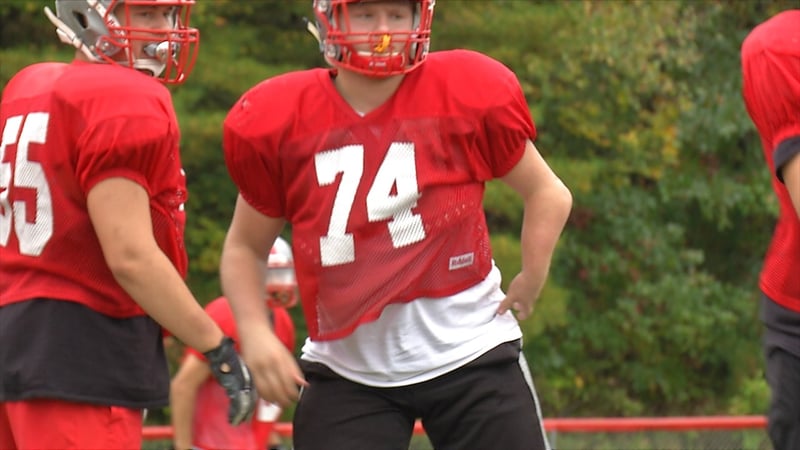 Binghamton, N.Y. – The phrase, “Life’s 10 percent what happens to you and 90 percent how you react to it” is a phrase that Chenango Valley senior Lucas Scott and his family have related to since the moment Lucas was born.

It was in December 2000 when Mike and Wendy Scotts’ world was turned upside down in a matter of seconds. The married couple walked into Syracuse hospital ready to give birth to two children, but left the hospital with only one child. In that horrific moment, their worlds were going to be shaken up once again. Their child who was born, Lucas Scott, was born with a birth defect.

“Being first time parents, it was really difficult for us” said Mike Scott. “It was trying and upsetting but we knew that everything was going to be okay.”

The birth defect was Ulnar Club hand, in Lucas’s left arm. Ulnar Club Hand is when you’re born without a growth plate. The ulnar bone is either partially missing or gone altogether, making the form-arm shorter and curved at the wrist.

“We came to a realization that no matter what this wasn’t going to be a hindrance to Lucas” said Mike. “He was never going to know he was different.”

Confidence and humility was instilled in Lucas at a very young age. It’s natural for children to be confused and ask themselves ‘why me’? when dealt with a bad deck of cards, but Lucas never thought of himself as different. He also never allowed his disability to hold him back and never viewed it as an excuse.

“Growing up, you know, you’re always thinking. Always wondering” said Lucas. “I’d be lying if I said I never thought, ‘why did this happen to me?’ But, you know, it happened because I’m the person I am and it has made me a better person” Lucas said.

Not only did it make him a better person, but it also made him a better athlete. Lucas’s love of sports was formed at the age of five years old when he picked up a football for the very first time. In that moment, he was instantly hooked and made it his mission to prove to others and to himself that you can do anything you put your mind too.

"When I look at my arm, you know... I never viewed myself as different, but it's been something that has always pushed me to work twice as hard at everything” said Lucas.

“He has taught me to be tough” Lucas said. “To be the bigger person. He taught me to take whatever situation that’s thrown at me and work through it. He led me to believe that I can be bigger than I think I am.”

Lucas's and Keith's relationship started when Lucas was born and it became instrumental to Lucas’s growth.

"What I have is a physical disability, right? I don't let it hold me back” Lucas said. “My physical achievements are lifting. Keith has helped me get there. He's taught me that I can do anything. “

“He told me that most problems aren’t physical they are mental” said Lucas. “I have the type of brain that work through it.”

Lucas started playing sports competitively in the 7th grade and that’s when Keith’s support became even more important. Since the 7th grade, Keith has customized workouts for Lucas by researching, calling companies and finding exercises that will not damage Lucas’s elbow joint, shoulder or wrist.

“It truly inspires me to be apart of Lucas’s growth” said Keith. “He’s always had a good amount of confidence. I mean, maybe not on the athletic field, but I believed in him and so didn’t his father. But, overtime when he had success I could see that things were changing for him.”

The way Lucas has grown and now carries himself as a person, an athlete and as a friend has been inspiring to all those around him.

"He's a tremendous person. On and off the field. I don't know how he does it” said teammate, Brady Hope. You know, like you said, it doesn't effect him I don't think. Mentally and physically he's a true warrior.”

As for Lucas’s future, the offensive lineman has committed and signed to play football at Wilkes University. The scholar athlete was also accepted into the Wilkes University honor college and will be studying environmental engineering in the Fall of 2019.