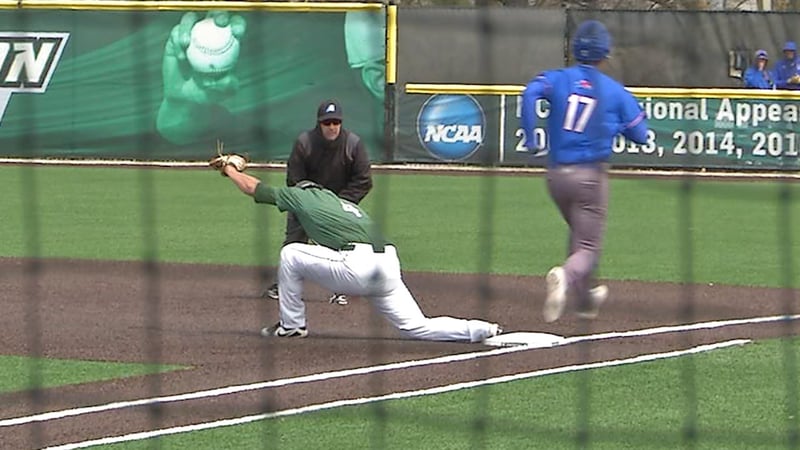 Binghamton baseball (8-15, 4-4 America East) stifled UMass Lowell in a doubleheader sweep Saturday afternoon at the Bearcats Baseball Complex. Binghamton limited the visiting River Hawks to one run over 16 innings and won 5-1 and 3-0, stretching its win streak to four games.

In the opener, junior right-hander Nick Gallagher (W, 2-4) struck out six and allowed just four hits and no earned runs in 6.0 innings. Junior left-hander Robert Brown pitched 3.0 scoreless frames to notch his first save of the season. Brown hasn't allowed a run in 10.1 innings this spring.

After Gallagher struck out three in the top of the first, BU used a walk, two singles and a two-run outfield error to jump ahead 2-0. After UML got a run back in the top of the fourth on a hit-by-pitch, error and RBI groundout, BU responded with two more runs on three hits in their half of the inning. Senior catcher Jason Agresti and senior shortstop Paul Rufo opened the frame with back-to-back singles. A wild pitch scored Agresti from third and two batters later, senior designated hitter Pat Britt brought in the fourth run with an RBI double to left.

In the seventh, sophomore third baseman Justin Drpich hit a one-out double and junior right fielder Anthony Meduri followed with an RBI double to the wall in right field to make it 5-1.

Senior first baseman Luke Tevlin went 2-for-3 and Agresti and Britt each went 2-for-4.

In the bottom of the third, BU broke on top when sophomore catcher TJ Wegmann and senior center fielder CJ Krowiak hit back-to-back singles and Agresti delivered an RBI single to center.

Two innings later, Meduri doubled to the wall in left field to lead off. After a walk to Krowiak and a groundout, Rufo knocked a 2-2 pitch up the middle for a two-run single and 3-0 Bearcats cushion.

In the top of the sixth, Meduri provided a defensive gem when he went a long way into right center and dove to snare a long fly ball with a runner on second. Krowiak then dashed to make a catch in short center to end the threat.

In the seventh, TJ Wegmann made a stellar catch behind home plate of a foul fly that hugged the netting, Nick Wegmann fanned his season-high eighth hitter and a grounder to second ended the game.

The teams will finish their three-game series at 1 p.m. Sunday.