BU women lacrosse get the comeback over Colgate 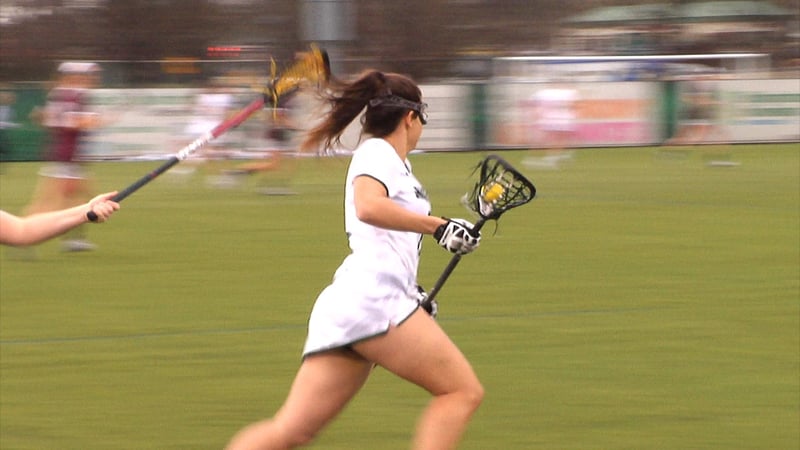 The Binghamton women's lacrosse team (3-1) secured a 13-9 comeback win over the Colgate Raiders (2-1) in their home-opener Wednesday evening at the Bearcats Sports Complex. The win, which featured goals from seven different Bearcats, was powered by a 6-0 run to start the second half.

"It really came down to the adjustment we made in the second half," head coach Stephanie Allen said. "We came back defensively, sparked by some players that don't see a ton of playing time but gave us what we needed to take back control of the game. We were patient on the offensive end, getting good looks and capitalizing on plays that we missed in the first half. It's a great win to get on our home-opener, but we talk a lot about never settling. These girls come outside and pay their rent on the field everyday, and we need to stay humble and hungry to keep getting the results we want. The girls know what work needs to be put in to be successful and we're looking to continue this success on Friday against Boston College."

The Raiders controlled most of the first half of play, scoring six goals to Binghamton's three. Rebecca Golderman put Binghamton on the board at 16:51 following three straight Colgate goals. Three minutes later, Skye Schumacher followed suit, netting her first of the game on an unassisted shot at the 13:50 mark. Callon Williams scored the final Bearcats goal of the half at 6:43, keeping BU within reach trailing only 6-3 heading into halftime.

Looking for a fresh start heading into the second half, Binghamton rolled through the first 13 minutes of play, scoring six consecutive goals to secure their first lead of the game. Brianne Arthur and Golderman combined for back to back goals in under two minutes before Kennedy scored three straight to fuel Binghamton's momentum. Paige Volkmann scored her sixth of the season shortly after, pushing the Bearcats up 9-6 at the 17 minute mark.

With a defensive switch and an overwhelming presence in the draw control circle, BU held the Raiders to just three goals in the second half, two of which came immediately following the Bearcats comeback surge. The Colgate attempt to close the gap lasted just 20 seconds, before Arthur and Golderman combined for consecutive goals to take an 11-8 lead. Stefanie Frolo scored her first of the game off a feed from Volkmann at 4:11 for a man-down goal to extend the lead to four. Colgate found the back of the net once more, before Golderman scored her fourth and the final goal of the game with just :33 left on the clock to clinch the 13-9 victory.

The Bearcats have a quick turnover as they hit the road to take on No. 2 Boston College on Friday, March 2. The game is set for a 1 p.m. start time in Chestnut Hill, Massachusetts.