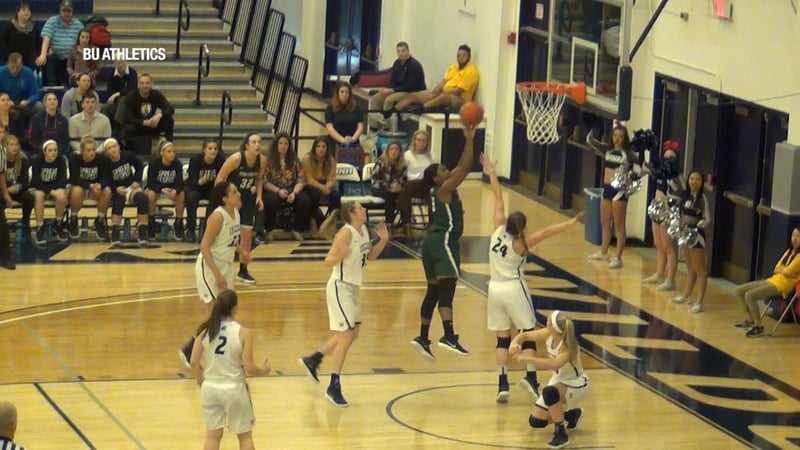 Senior guard Imani Watkins sank a pair of free throws with 0.6 seconds remaining, lifting Binghamton (14-7, 5-3 AE) to a 54-52 win over New Hampshire (14-7, 5-3 AE) in an America East women's basketball game on Saturday afternoon at Lundholm Gym. The victory is the third straight for the Bearcats as well as their second consecutive triumph on the road.

Watkins finished with a game-high 35 points – just one point off her career high. In the process, she reached the 30-point mark for the second time in three games as well as the third time this season. For her career, Watkins now has 1,936 career points.

For the season, Watkins is now averaging 22.3 points per game. That is ahead of the program record 21.3 points averaged by Bess Greenberg during the 1999-00 season.

In addition, Watkins recorded a career-high nine steals. That ties the second-highest total ever by a Binghamton player and is the most since Stephanie Rom also had nine against Cortland back on Jan. 31, 1995, when the program was still competing at the NCAA Division III level.

Watkins' final two points against New Hampshire were her biggest. With the score tied at 52-52, she was fouled in the act of shooting a three-point field goal with 0.6 seconds remaining. Watkins sank the first two free throws, giving the Bearcats the margin they needed for the win.

In the first quarter, Watkins was held without a point and the Bearcats fell behind 12-10. She then scored 12 points in the second period – including a jumper at the buzzer – as Binghamton went up 27-23 at the half.

The Bearcats took control of the game with a 6-0 run in the opening 2:49 to go up 33-23. Watkins punctuated the run with a three-point field goal.

New Hampshire, however, came all the way back to deadlock the game at 52-52 with 19 seconds left in regulation. Brittni Lai, who hit the game-winning shot in the Wildcats' Jan. 10 win at Binghamton, was the player who made the game-tying layup.

That set the stage for Watkins' heroics.

Binghamton and New Hampshire each finished with 34 rebounds and 10 assists. Led by Watkins, the Bearcats recorded 12 steals and scored 17 of their points off of turnovers.

The Bearcats travel to Vermont on Wednesday for a 7 p.m. game.