Lady Bearcats off to best start since 2006 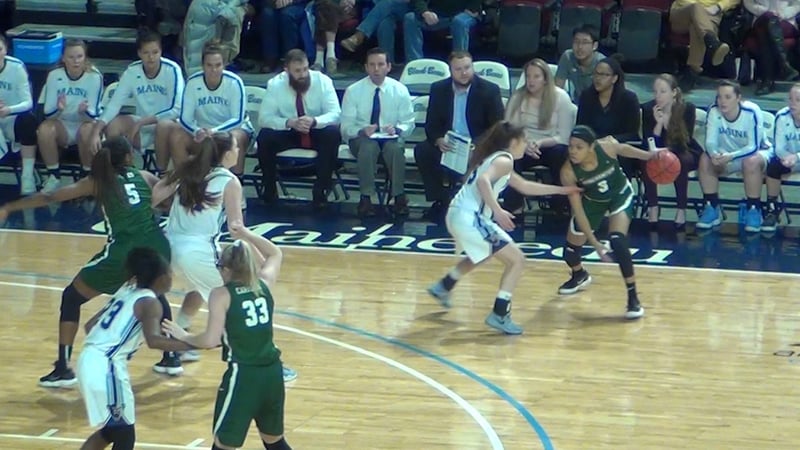 Senior guard Imani Watkins finished with a game-high 23 points, leading Binghamton (10-4, 1-0 AE) to a 66-62 overtime win over Maine (8-7, 1-1 AE) in an America East women's basketball game on Saturday afternoon at the Cross Insurance Center. With the victory, the Bearcats have their first six-game winning streak since the 2003-04 season and remain off to their best start since the 2005-06 campaign.

It was Carmody who forced overtime when she came up with a steal and a fast-break layup, deadlocking the score at 59-59 with 1:04 left in regulation.

Watkins and the Bearcat defense then took over in the extra period. Although Maine went up 62-59 on a three-point field goal by Fanny Wadling at the 4:17 mark, those would be its final points of the game.

Watkins trimmed the deficit to 62-61 on a jumper with 3:17 remaining. After two minutes of scoreless action, she then came up with a steal and was fouled in the act of shooting. Watkins made the ensuing two free throws, putting the Bearcats ahead 63-62 with 57 seconds left.

On Maine's next possession, Moon got the steal and James finished the play with a layup, padding the lead to 65-62 with 20 seconds to go. After a Black Bear missed three-point field goal, Watkins iced the game by making one of two free throws with six seconds left.

Before Carmody forced overtime, the lead swung back and forth throughout the second half. The Bearcats were down the entire first half but came back to go up 41-37 on a layup by Watkins with 3:19 left in the third period.

Maine, however, scored the final 10 points of the period to take a 47-41 advantage. Julie Brosseau, who finished with 20 points, had five points during that stretch.

Watkins tied the score at 57-57 on a layup with 2:12 remaining but Millan, who finished with a team-high 21 points, put Maine back up by two points with 1:51 remaining. That set the stage for Carmody's game-changing moment.

Watkins and Carmody each finished with a game-high four steals.

The Bearcats outscored Maine 32-18 in the point and netted 24 of their points off of turnovers. The Black Bears, however, drained 11 three-point field goals.