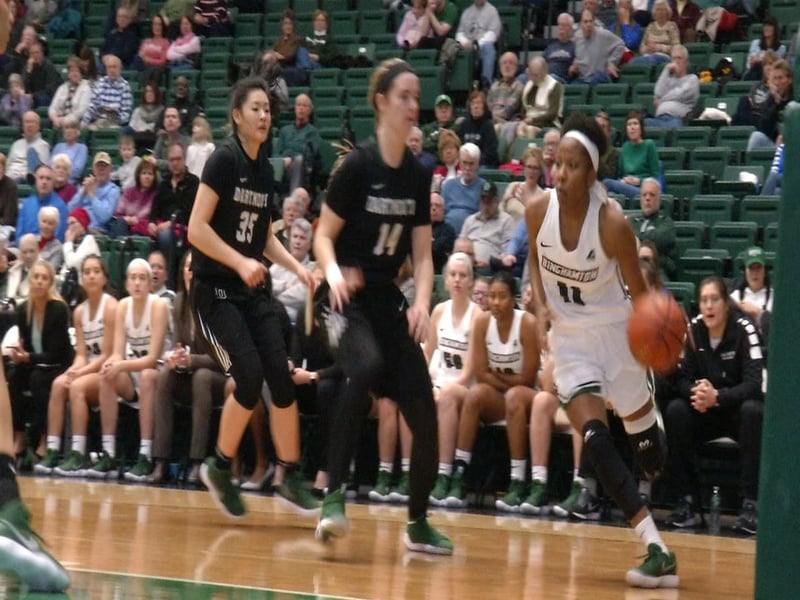 Senior guard Imani Watkins scored a game-high 24 points and sophomore guard Kai Moon added 19 points, powering Binghamton (9-4) to an 80-64 win over Dartmouth (8-5) in a non-conference women's basketball game on Sunday afternoon at Dr. Bai Lee Court at the Events Center. With the victory, the Bearcats conclude non-conference play with a five-game winning streak, their longest run since the 2003-04 season.

With its 9-4 record, the Bearcats remain off to their best start since the 2005-06 season. They also finished up the year 3-1 against teams from the Ivy League.

Watkins, who has now reached the 20-point mark in three straight games, also finished with four assists and five steals against Dartmouth. She leads the America East with 20.9 points per game and now has 1,740 career points. Watkins continues to rank third all-time in Binghamton program history as well as No. 19 in America Eats Conference history.

Against Dartmouth, the Bearcats blew the game open in the first half, draining 11 three-point field goals to take a 52-29 lead. Binghamton shot 54.8 percent overall (17-31) during the opening 20 minutes and was 68.8 percent from beyond the three-point arc (11-16). It marked the first time Binghamton has scored at least 50 points in a half since netting 51 points in the second half of a game against Northeastern back on Jan. 29, 2005.

Binghamton stretched its lead to as much as 68-41 at the end of three quarters. The Bearcats then maintained at least a 16-point cushion over the final 10 minutes of play.

"I am really proud of our team," head coach Linda Cimino said. "I thought this was a big win for us as a program. Dartmouth is a great team and I thought we showed that we can compete with a team with really good guards and really good post players. I was happy with our defensive effort and we shot and shared the ball really well today."

The Bearcats finished the game with a season-high 16 steals and shot 80 percent from the free throw line (16-20).

The 80 points is the second-highest total Binghamton has scored this season, trailing only its 90 points against Cortland back on Nov. 13. In addition, the Bearcats' 14 three-point field goals also represents its second-best total of the season. They had 16 treys in the game against Cortland.

NOTES: From Feb. 14-March 3, 2004, Binghamton won six games in a row … Krchnavi has now reached double figures in rebounding twice this season … Watkins now has 37 career games with at least 20 points … the Bearcats have now placed at least four players in double figures the past two games.