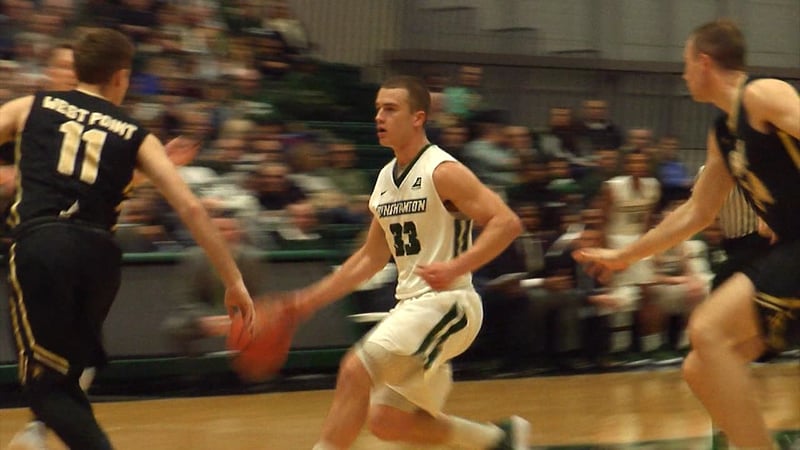 After a seven-day layoff for final exams, Binghamton men's basketball (7-4) carries a six-game win streak into its road game Sunday at Sacred Heart. The win streak, BU's longest in nine seasons, ranks 15th in the nation and is the longest current streak in the America East.

The game against the Northeast Conference member Pioneers will be the first of two away tilts in a three-day span. After Sunday, BU will head to Penn State for a first-ever matchup with the Big Ten Nittany Lions on Tuesday.

The Bearcats are coming off a 77-64 road win over Loyola last Saturday. In that game, senior forward Willie Rodriguez scored 18 of his game-high 22 points in the second half after junior guard J.C. Show hit for 15 in the first half to help stake BU to a 36-21 halftime cushion.

The Bearcats shot 58 percent and won the battle on the glass, raising their record to 7-0 when outrebounding opponents.

Binghamton is scoring just under 80 points a game during its six-game win streak. The Bearcats are plus 14 in the scoring column and are shooting 51 percent as a team during the run. The team ranks first in the America East in scoring defense (allowing 68.3 ppg.) and second in field goal percentage (.493) and scoring margin (+6.1).

Individually, junior center Thomas Bruce's name is scattered throughout the statistical leaderboard. Bruce (14.7 ppg., 9.1 rpg.) leads the America East and ranks fourth in the nation in blocks. He also ranks 16th in the country in double-doubles (5) and 23rd in rebounds. Bruce also leads the conference in field goal percentage (.623).

Sacred Heart (5-6) is coming off an 86-72 loss to fellow America East member Hartford on Monday. In that game, the visiting Pioneers were within one point at half before Hartford hit 20-of-29 (69%) shots in the second half. Senior forward Joseph Lopez led SHU with 22 points and 11 rebounds - his fifth double-double of the season. Sacred Heart defeated two other America East teams in November - 87-80 over UMass Lowell and 69-68 in overtime over Maine.

The Pioneers returned four starters and eight lettermen from a 13-19 team that placed eighth in the Northeast Conference last season. The team was picked to finish fifth (of 10) this season. Lopez was a preseason NEC all-conference selection and is currently averaging 13.8 points and 9.5 rebounds.

Binghamton and Sacred Heart have split their only two previous games - both while each team was a member of the NCAA Division II New England Collegiate Conference in 1998-99. Each team won on its home floor. In the last matchup, Sacred Heart posted an 86-58 win on Jan. 20, 1999.