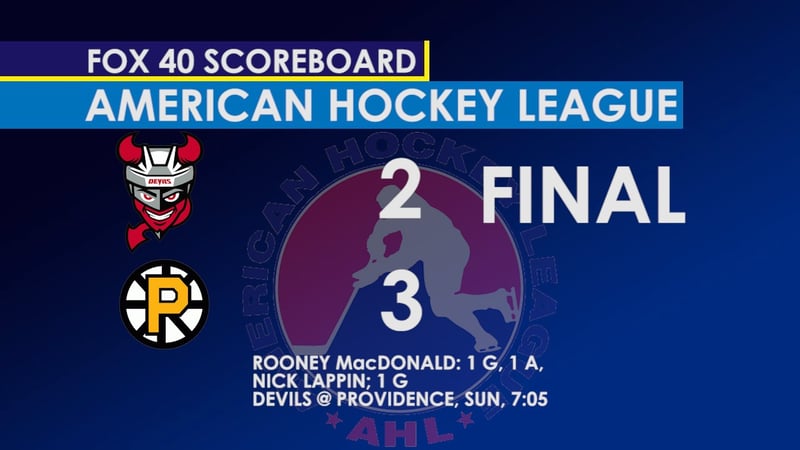 PROVIDENCE, RI – Nick Lappin scored a power-play goal in the third period but the Binghamton Devils could not complete a late comeback in a 3-2 loss on the road to the Providence Bruins on Friday night from Dunkin’ Donuts Center.

Kenny Agostino put the Bruins up just 1:45 into the game. Chris Breen took a shot from the left point that Agostino deflected by goaltender Ken Appleby for the 1-0 lead. The goal was Agostino’s fifth of the year with assists from Breen and Ryan Fitzgerald.

Binghamton responded 12:45 into the game courtesy of Jacob Macdonald’s eighth of the year. Tim Kennedy worked the puck below the goal line and fed the puck to Blake Pietila inside the circle who tapped it out to MacDonald at the point. The shot went through traffic and beat goaltender Zane McIntyre to tie the game up at one goal apiece. Assists on MacDonald’s goal were credited to Pietila and Kennedy.

Late in the first period, Fitzgerald cashed in on a power play to put the Bruins back up by a goal. Jakub Forsbacka-Karlsson found Fitzgerald for his sixth goal of the season and Providence took a 2-1 lead with 3:46 left in the opening frame. Assists were given to Forsbacka-Karlsson and Colby Cave and Providence took a 2-1 lead into the second period while also outshooting Binghamton, 12-6.

Another power-play goal in the middle period put the Bruins up 3-1. Fitzgerald returned the favor and fed Forsbacka-Karlsson who lifted the puck over the shoulder of Appleby for the two-goal lead. The goal was Forsbacka-Karlsson’s sixth of the year with assists from Fitzgerald Josh Hennessy and Providence took a 3-1 lead into the final period.

Lappin pulled the Devils within a goal on the power play in the third period. MacDonald held the puck in on the blue line and fed Lappin who snapped the puck over the shoulder of McIntyre for his team-leading 11th goal of the year. The goal came 6:45 into the final period with the only assist going to MacDonald.

The Binghamton Devils stay on the road tomorrow night in Providence to face the Bruins at 7:05 p.m. The next home game is Friday, December 8 against the Syracuse Crunch at 7:05 p.m. It’s Teddy Bear Toss Night and fans can order a special Teddy Bear Package that includes a ticket to the game and a teddy bear to throw on the ice! Call the Devils’ front office at 607-733-7367 for more information.