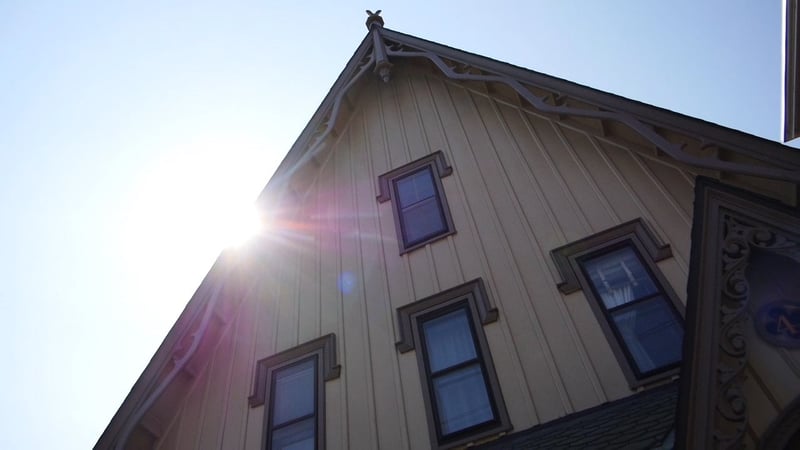 Driving through Binghamton, it's clear there is no shortage of historic homes on the city's west side. But it's a house tucked away on Pine Street downtown that is listed as a National Historic Landmark.

Built around 1853, the Alfred Dunk House is sometimes referred to as "the dollhouse." Looking at the quaint Victorian home, it's easy to see why, but it's owner could be described as anything but dainty.

“He was in iron working," says Jeanne Ketchum, Regent of the Tuscarora chapter of Daughters of the American Revolution, the group that currently owns the house.

An iron worker lived in this house with gingerbread trim. An original wrought iron fence surrounds the property which, even in 1853 stood out in what was one of Binghamton's upper middle class neighborhoods.

“It was an important street. Doctors and lawyers lived on the street," says Ketchum, "Alfred Dunk was doing very well."

The same couldn't be said about the house, which fell into decay over the years.

“The walls had big holes in them," says Ketchum.

Through the years, the Dunk House changed owners several times. In the 1980's, a couple with a love for all things old gave it new life. Howard and Phyllis Brinker sold antiques, a wing of the house serving as the shop.

“Howard Brinker did a lot of restoration of this house," says Ketchum.

Brinker put back together the cherry banister that was found in pieces. He restored brass fixtures on windows and doors that were original to the house. He even pieced back together the decorative woodwork that crowns the very top of the steep roof, which, like the banister, had been shattered.

The city presented the Brinkers with an award for the restoration of the home in 1981. Phyllis, a longtime member of the Daughters of the American Revolution died shortly after the restoration was complete. Howard gifted the house to the D.A.R. in his wife's memory.

“It’s very important to us to continue to restore and maintain these pieces of history," says Ketchum.

So next time you're driving down Pine Street, look to your right. The Dunk Dollhouse still stands tall, a permanent reminder of the city's past.