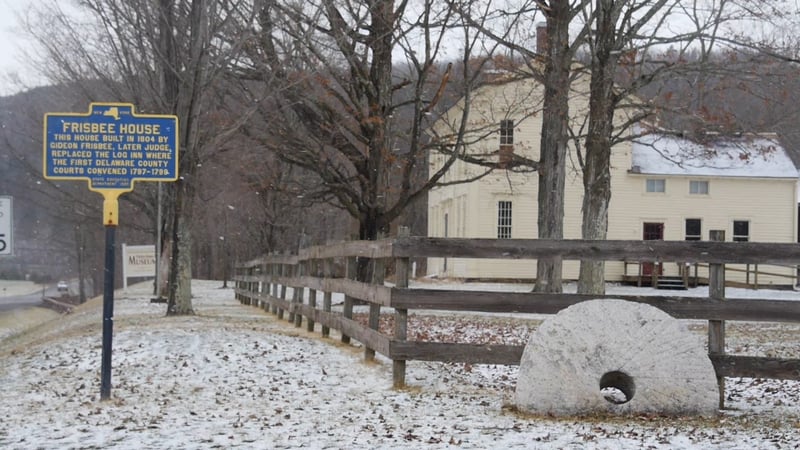 Fox 40 continues our series to give you an inside look at some of the region's legacy landmarks.

In March, the focus is on one of Delhi, New York's most historical sites -- the Frisbee House.  It's a home that's older than the town in which it resides -- and is referred to as a central part in the creation of Delaware County.

However, Duerden said historians still don’t know exactly how its owner, Revolutionary War veteran Gideon Frisbee, received the land on which it stands.

“We’re not sure how he acquired the land, to be honest with you. He settled on the land in the 1780s,” said Duerden.

At the time, the area was mostly forest.  Frisbee, like other early settlers, cut down trees to build his family a log home -- and once they had prospered enough through farming and selling logs, he constructed the Federal-style home that stands to this day.

A prime location for the farmhouse that also served as a tavern and inn.

“We like to claim that this is the birthplace of Delaware County,” said Duerden.

It all leads back to the house's tavern room.

“The first organizational meeting in 1797 of the government of Delaware County, so the first supervisors, met here in this room,” said Duerden. "County meetings, county court proceedings, trials and things of that nature continued in this room for about a year, maybe 18 months, until a building or specific courthouse could be built in the Village of Delhi."

Similar to his home -- Gideon Frisbee became a fairly prominent figure in the county’s early history, even serving in an associate justice position.

“He was one of the first county judges in Delaware County, even though he had no specific legal training,” said Duerden.

Frisbee and his first wife, Huldah, had six children.  After Huldah died, he remarried a woman named Freelove -- and had six more children.

“The story is really one that in a sense they became sort of an average rural farming family by the mid-19th century,” said Duerden.

Frisbee died in 1828 -- and left the home and property to Freelove and his family, along with a steep mortgage and other debt.  Eventually, the family would ownership for a period of time.

“In 1857, they ran into hard times essentially and the bank took it over.  But then the story has a happy ending because the family was able to get it back ten or 15 years later,” said Duerden.

In the early 1960s -- the Frisbee family would pass on the home to the Delaware County Historical Association to help preserve its history for future generations to come.

“The Frisbees are still around.  We still have some great Frisbees who come here and help us out,” said Duerden.

The patriarch of future Delaware County Frisbees, Gideon Frisbee, now lies in a cemetery located behind the family's original barn and historic house.  He's among locals who’ve passed, including other war veterans and Frisbee family members -- with his gravestone between his first wife Huldah and second wife Freelove.

And nearly two centuries since his death, Frisbee's legacy lives on.

The house/museum is open for tours Tuesday through Sunday, 11:00 a.m. to 4:00 p.m., from the last weekend in May through Columbus Day.

For more information, you can visit the Delaware County Historical Association’s website.

For more information on Frisbee's descendants that still live in the Delhi area, click here.