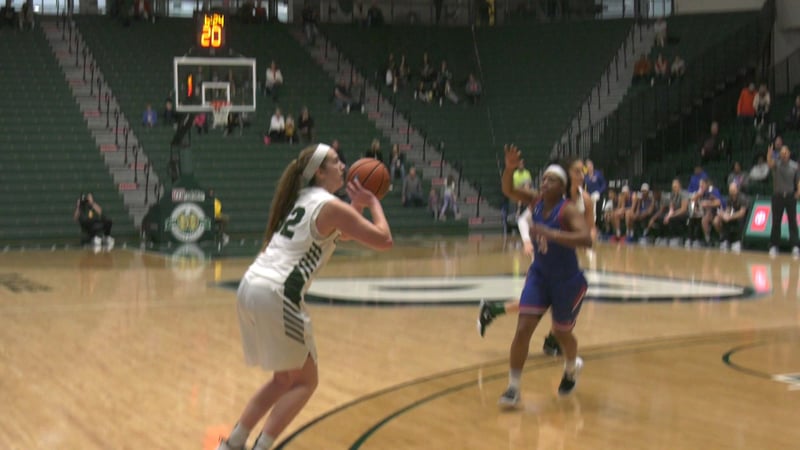 Rolling hit seven of her 15 field goal attempts for the game. From beyond the three-point arc, she made four of her six shots.

The loss overshadowed a career day by junior forward Olivia Ramil, who finished with 13 points, 20 rebounds and five blocks. The 20 rebounds is the most recorded by a Binghamton player since Jen Gaeta grabbed 22 rebounds against Albany way back on Nov. 22, 1993. The program competed at the NCAA Division I level back then. In addition, the five blocks is also the most turned in by a Binghamton player since Alyssa James had five rejections against UMass Lowell on Feb. 17, 2018.

Three other Bearcat players reached double figures in scoring against the River Hawks on Saturday. Senior guards Kai Moon and Carly Boland each netted 12 points while freshman forward Denai Bowman finished with 10 points for the second game in a row. Boland also tied a career high with four blocks while Moon and Bowman each finished with three steals.

As a team, however, Binghamton was undone by shooting just 28 percent for the game. The Bearcats shot the ball 82 times but connected on just 23 occasions.

"We had a slow start and weren't aggressive in pushing the tempo of the game," head coach Bethann Shapiro Ord said. "Shots weren't falling for us to today but UMass Lowell is a good team and they came in ready to go."

Undaunted, the River Hawks scored the next eight points to go up 46-42 with 8:20 left in regulation. Shamyjha Price scored four points during that span.

Binghamton finished the game with a season-best 50 rebounds. It is the most rebounds the Bearcats have recorded in a game since they had a program-record 66 against Cortland on Nov. 13, 2017.

Despite Ramil's performance, the River Hawks outscored Binghamton 32-22 in the paint. In addition, UMass Lowell was 5-for-9 (55.6 percent) from beyond the three-point arc.

Sophomore forward Annie Ramil had nine rebounds for the Bearcats.

Moon now has 1,189 points for her career and moves into 10th place all-time in program history. Against UMass Lowell, she surpassed Laine Kurpniece, who scored 1,188 career points from 2004-08.

Boland now has 131 career three-point field goals and moves into sole possession of ninth place all-time in program history. She entered the game against the River Hawks tied for ninth place with Katrina Roggenbaum (1990-94) who drained 129 career three pointers.
Binghamton travels to Vermont on Wednesday for a 7 p.m. game.