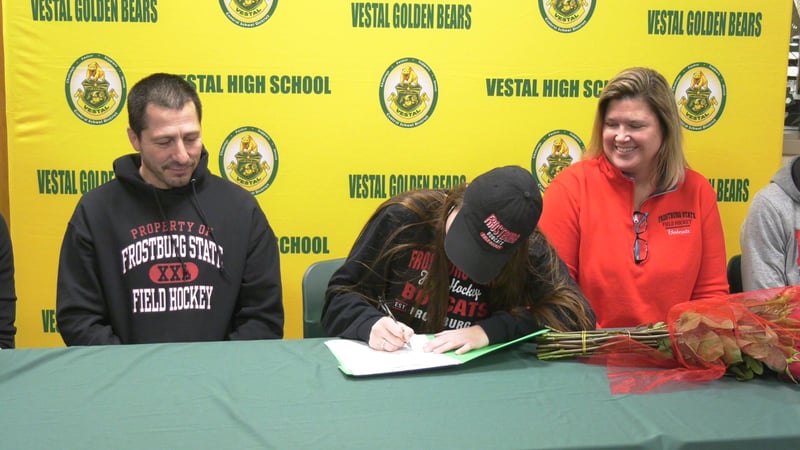 Vestal high school senior Gabrielle Rosas signed her National letter of Intent to play field hockey for Frostburg State University in Maryland. Rosas is the Bobcats first field hockey recruit to sign since they moved up to Division 2 from Division 3. In honor of that she will be wearing number 1 at Frostburg. Rosas has played varsity field hockey since 8th grade. She spent 8th and 9th grade in the Cortland School District before moving to Vestal. As a member of the Golden Bears Rosas was a key cog in the team winning 2 Section 4 Class B Titles, two regional championships and two new York State Final Four Appearances. She was named a league All-Star both her sophomore and senior seasons. Out of season she plays with the Southern Tier Storm and the elite Pennsylvania Electric Surge Programs. She says this has been a day she has been working towards for a long time.

"It's exciting, I was really really nervous," says Rosas. "But I'm really excited to take this step into the future and I've kind of been waiting for this moment my whole life. I started varsity field hockey in 8th grade and I knew I wanted to play college field hockey since then."

Rosas has also been recognized as a 2-time scholar athlete and honor roll student. She plans on majoring in English with a double minor in Creative Writing and Journalism. Rosas says her goal is to either write for a travel magazine or to become a screenplay writer.