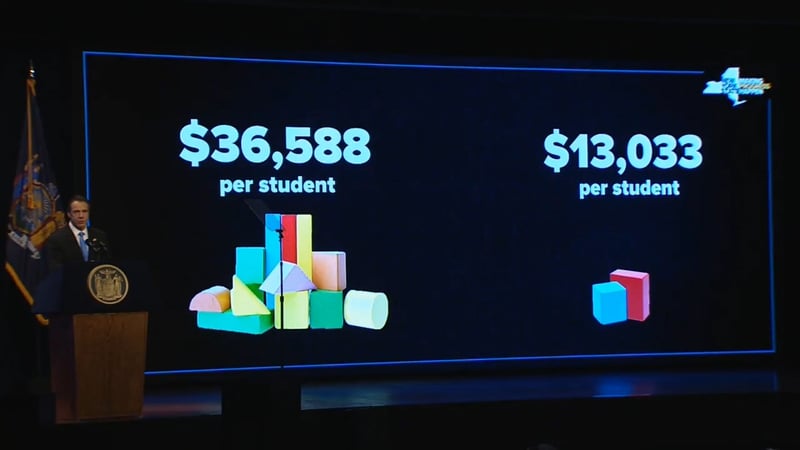 Governor Andrew Cuomo gave his state of the state address on Wednesday, covering proposals in areas of environmental issues, the economy, and education. In past years, there has been a larger number of education-oriented proposals in the governor's budget, but this year he focused in on one main thing: a proposal to change the way state aid is distributed among public schools.

"It's shameful that we do not distribute the funds in a more progressive way," said Cuomo, "The reality is that wealthier districts are much higher funded than poorer schools in poorer districts."

Public schools get their revenue from two main sources: local property taxes and state aid. To put it into perspective, Windsor Schools Superintendent Jason Andrews says his district relies on state aid for around half of their revenue. Andrews says the formulas that determine how much each district gets are very complicated, taking into account population, student body, and incomes of district residents.

Andrews was in Albany for Cuomo's address and took some notes for what to be looking out for in this year's budget.

"For districts in our region who are very dependent on state aid, that's a big deal. For other areas of the state where it's really all about the local property tax, where only maybe 10% of their funding comes in the form of state aid, then the state budget is not as essential as it is to us in this region," says Andrews.

Right now, it's a bit of a question mark as to how the formula might be changed and who will be affected. Andrews, like everyone else, is waiting to find out more when the governor submits his final budget plan, which is due on January 21st.

Something Andrews says he was excited to hear about in Cuomo's speech is the STEAM high school going in an empty school building in Syracuse. The project aims to educate the future workforce to fill the many skilled labor job openings across the region. Andrews says our area is lucky to have programs through Broome-Tioga BOCES, but he would love to see more like what Syracuse is doing come to Broome County.