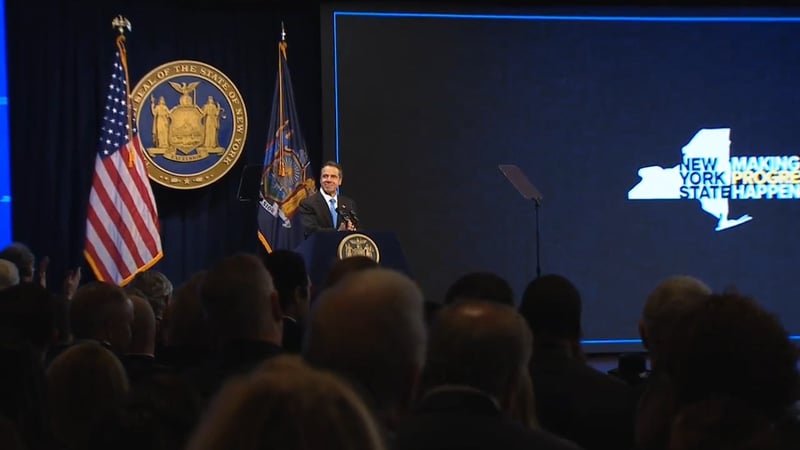 Governor Andrew Cuomo gave his 10th State of the State in Albany on Wednesday. The nearly one and a half hour speech started with comments on climate change and ending with a plea for love not hate, spurred by the recent anti-Semitic attack in Monsey, New York.

While many of Cuomo's proposals were not a surprise (his office has been sending out press releases for each proposal weeks in advance), he did talk in farther detail about a few of his goals for 2020. This includes taking the plastic bag ban farther with the added elimination of styrofoam containers and a restated commitment to legalizing adult use of marijuana. Cuomo is proposing funding a hemp and cannabis research facility headed by SUNY.

"I've already started making calls to assess whether or not Binghamton University would be in a position to house that center," says Assemblywoman Donna Lupardo, "Of course, I know that our pharmacy school is already engaged and is interested in this research, but it would be a perfect fit."

Lupardo says she was also pleased to hear of a proposed tax break for small businesses. The democratic assemblywoman says this could really help business owners across the Southern Tier.

However, both Lupardo and Senator Fred Akshar voiced concerns over the state's deficit. In a statement issued after the address, Akshar called the speech "an aggressive and robust spending agenda that comes with a hefty price tag that New York's hardworking taxpayers will be forced to pay."

Assemblyman Clifford Crouch called the speech a "dog and pony show" and says that the state has a $6 billion deficit.

While no major funding was brought up in regards to the Southern Tier, Binghamton University professor and Nobel Prize winner Stanley Whittingham did get a shout-out and was appointed to lead an electric vehicle task force. This is part of the governor's focus on environmental issues. He also wants to increase funding for emergency response to natural disasters.

While reviewing what was done over the last year, the governor showed a list of New York airports that underwent renovations. Noticeably missing from that list is the Greater Binghamton Airport. On Wednesday, Cuomo said he wants to build more airports in the state in 2020.

An omission from the speech that Assemblywoman Donna Lupardo noticed was agriculture.

"The one thing I was struck by, as the chair of the Committee on Agriculture, was there was really no reference to agriculture in the speech," says Lupardo, "I'm looking forward to seeing the governor's budget and making sure our family farms and those food producers that are popular throughout our area are supported."

The governor also did not address the recent enactment of criminal justice reform laws that are receiving push back from law enforcement.

"I also found it odd that the Governor made no mention of fixing disastrous bail reform law that needs to be addressed immediately," said Akshar in a statement.

"Despite him expressing an interest in revisiting the issue, his presentation failed to address it. Every day the governor and state democrats delay is another day our communities are at risk," says Crouch.

Cuomo's proposals, 34 in total, will be voted on in the state budget process, which has to be finalized by April 1st.