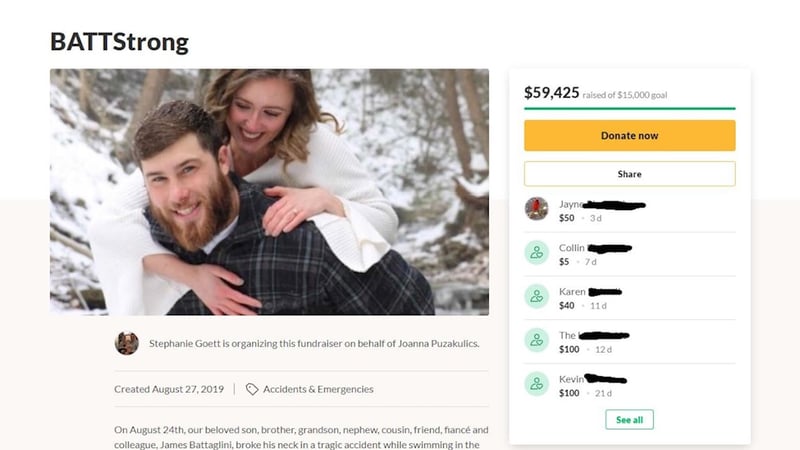 The community is rallying around a Vestal couple who had their life turned upside down after a tragic swimming accident back in August.

A pasta dinner fundraiser is planned for January 19th at the Vestal Elks Lodge to help James Battaglini with his recovery.

A few weeks before their wedding, James Battaglini and Joanna Puzakulics were enjoying a trip to Atlantic City. Then, everything changed. James broke his neck in a swimming accident on the beach. Friends of the couple from Vestal say it was by some miracle that a retired firefighter was swimming nearby and rescued him.

James underwent 6 hours of emergency surgery. He then suffered two collapsed lungs and had to be placed on a ventilator. James is now in a rehab facility in Philadelphia and Joanna hasn't left his side.

Since the accident happened in August, the couple has seen an outpouring of support from the community back home. A GoFundMe page was created for the couple to help them with medical and other expenses. The initial goal was $15,000. As of January 7th, donations to that page total more than $59,400.

Friends and family say it's going to be an expensive road to recovery and they want to do whatever they can to help. Which is why they're holding the pasta dinner benefit on January 19th at 12 p.m. at the Vestal Elks Lodge. Tickets are $10 and there will be raffles. All proceeds go to help James and Joanna.

"I think that it will show James that he has a lot of support behind him," says John Gardner, a longtime friend of both James and Joanna's families.