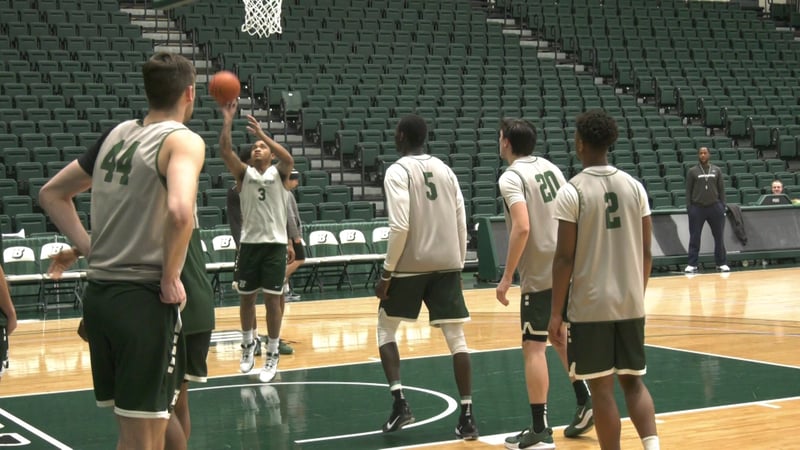 The Binghamton University Men's Basketball team opens up the America East Portion of their schedule Saturday at the Events Center against Albany. The Bearcats finished their non-conference play with a record of 6-7. There's a noticeable difference between the team's play at home and on the road as they boast a 5-1 home record but a 1-6 record away from the Events Center. Head Coach Tommy Dempsey says one of the big focuses when getting into conference play is scouting. He says it becomes much more important trying to find any advantage you can when you're playing the same team multiple times. With only 3 returners from last year's team, there is another key factor Dempsey is looking to emphasize to his team.

"The second piece other than the scouting is just the intensity," says Coach Dempsey. "The games are really important and the veteran teams know that. As we get out there with a new team I'm just trying to send the message and have Sam help me send is that the intensity is going to be at a different level at 4 o'clock on Saturday and we have to try and get our guys ready for it."

Dempsey says sophomore guard Sam Sessoms has been a great leader on and off the court. Sessoms currently is second in the conference in scoring averaging 19 points per game and leads the America East in assists per game with 4.7. After dropping both contests to the Great Danes last season Sessoms says it's important to open up Conference play strong against them on Saturday.

"Last year they were chirping a bit," says Sessoms. "I feel like I did play bad both of the games against them. From that aspect it's a rivalry and I need to prove myself. Ultimately I'm just trying to win this game and like Coach Dempsey said we're just taking it one game at a time. After we beat them Saturday I'm not thinking about them until the next time we play them."

Last season the Bearcats had a 5-11 conference record which put them in 7th. They did however upset second seeded Stony Brook in the conference tournament to advance to the semi-finals. Tip-off between BU and Albany on Saturday is set for 4pm.