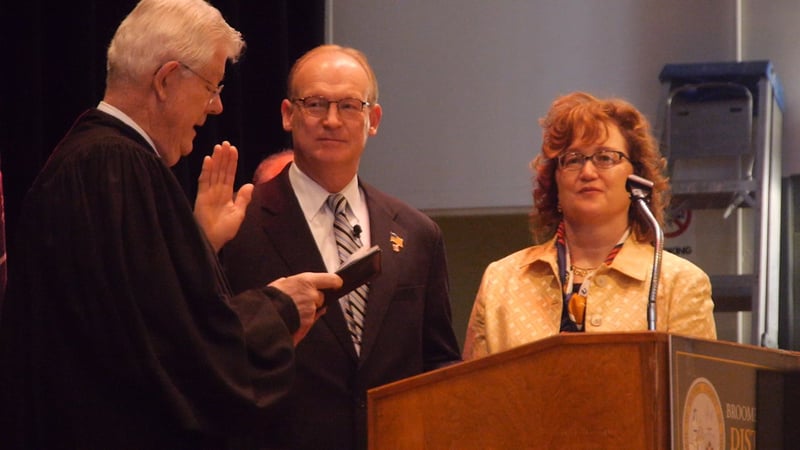 After a year-long campaign, Michael Korchak was sworn in as the new Broome County District Attorney on Wednesday at St Michael's recreation hall in Binghamton. In front of a room full of supporters, which Korchak called "the biggest jury I've ever spoken to," the former Chief Assistant DA took his vows of office.

Stepping up to the podium, Korchak said "What a day, it's hard to believe that we've reached this point."

The rec hall at St Michaels is packed ahead of new DA Michael Korchak’s swearing in ceremony. https://t.co/pVtJsgmHv3

It all started back in January, when former DA Steve Cornwell announced he would not be seeking re-election. Korchak announced his campaign weeks later and faced off with opponent Paul Battisti in a contentious June primary. Korchak lost the primary, but stayed in the race on the Libertarian party line. In the general election, Korchak came out ahead of Battisti and democrat Debra Gelson, but it was too close to call. Absentee ballots were counted and Korchak held onto the lead by 55 votes. Battisti challenged those results in court. A judge ultimately decided to deny Battisti's request for a full hand recount and the Board of Elections was able to certify the election results just two weeks before the start of the term.

Talking to reporters over the 1920s jazz music playing on speakers in the rec hall, Korchak says he is looking forward to focusing back on his work as a prosecutor and now the head of the DA's office. One of the more immediate things his office needs to address in the New Year is the state criminal justice reform laws that went into effect on the same day as the swearing in ceremony.

"A criminal defendant is entitled to discovery up front 15 days after arraignment. That puts a lot of stress on our office to collect the materials and then get them out to the defense attorneys," says Korchak.

Korchak says he also wants to expand programs already implemented through the office like the workforce diversion and recovery programs.

Korchak clarifies that of course, programs are meant for low-level offenders and to get people back on track, not to keep dangerous criminals on the streets.

Korchak says he does not foresee there being any issues moving forward working with any local agencies and if there is, he plans on sitting down to work it out.

Korchak has yet to appoint a replacement for himself in the role of Chief Assistant DA. When Fox 40 asked him about it a few weeks ago, he said he was starting to interview candidates.