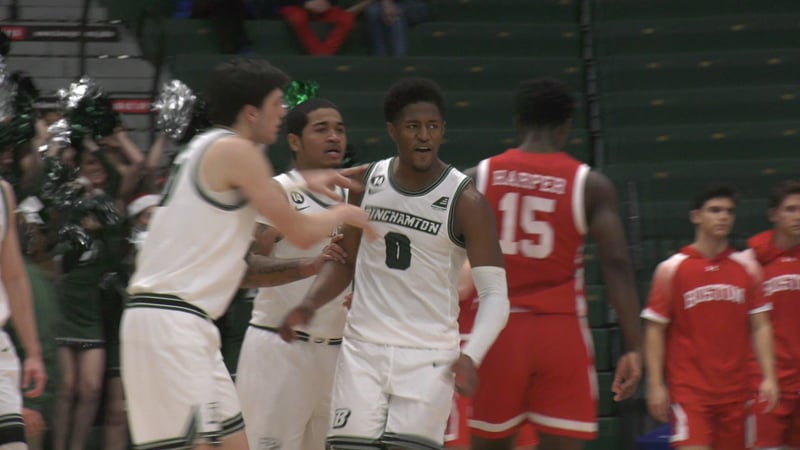 The see-saw game featured 11 ties and five lead changes and two brilliant individual performances. Sessoms made a school-record 15 field goals, shot 6-of-14 from beyond the arc and scored nine of Binghamton's 14 overtime points. Boston University senior forward Max Mahoney carried his team with 38 points and 13 rebounds.

After Bearcats' freshman forward George Tinsley gave the hosts a 70-68 lead with 41 seconds left in regulation, Mahoney countered with a bucket with 32 seconds left, forcing overtime. But Sessoms took over in the extra period. He drained a 3-pointer to give Binghamton the lead for good, 73-71, with 4:25 left. Sessoms then added two driving buckets while the Terriers misfired on 4-of-5. Senior guard Richard Caldwell asserted himself with a riveting fast break dunk with 1:22 left, pushing the Bearcats' lead up to six, 79-73. After Boston trimmed the margin to two, Sessoms stemmed the tide with a pair of free throws with 29 seconds left, giving Binghamton an 81-77 lead. Caldwell then finished off the scoring with a free throw and another thunderous dunk in the closing seconds. He produced his first collegiate double-double with 11 points and a career-high 13 rebounds.

Boston made just 4-of-11 in the overtime period while Binghamton converted 5-of-8 shots.