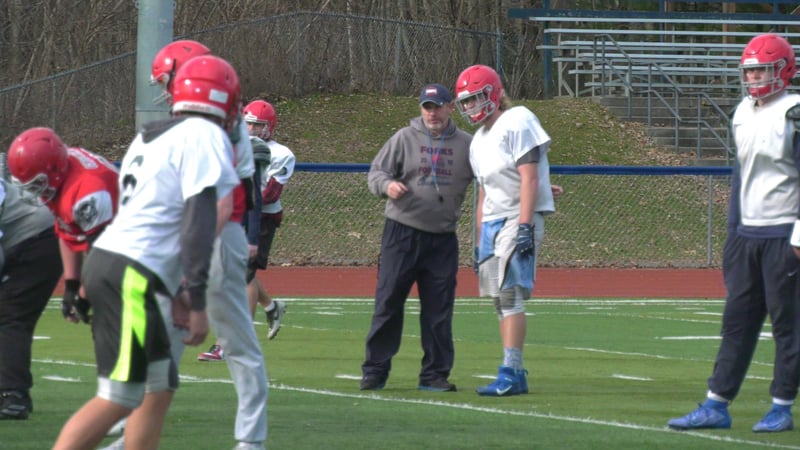 The Blue Devils are back in the State Title game after taking care of Western New York Maritime Charter and Health Sciences in the semi-finals 41-20. Forks is rolling into the championship on a tear. They are 11-0 on the season and since week 5 their average margin of victory is 26.5 points. Seniors Ethan Brown and Jack Zimmerman say a big reason for their success has been their focus on a common goal.

"I think it's just unity," says Brown. "We've never got down on each other and even if we did it was just for a second and then the rest of the team just talked it out and we always figured it out and stayed together."

"All the work we put in mentally and physically everyday with film and the weight room," says Zimmerman. "Just the work ethic and the coaches obviously."

Forks will be meeting the Section 2 Champion Schuylerville Horses. The 11-1 Horses since week 2 have allowed only 7.5 points per game. They've pitched 4 shutouts including 3 in a row earlier this season and have allowed only a single touchdown in both their state quarterfinal and semi-final match-ups.

"They're going to be tough on defense but I'll tell you their offense looks pretty tough too," says Chenango Forks head Coach Dave Hogan. "They got a lot of kids going both ways, they got some kids back that were hurt and they certainly look tough and it's going to be a challenge."

Hogan says Schuylerville runs a dynamic option attack on offense that they'll be working hard to prepare for this week. He says the biggest thing is for his guys to be prepared for the moment.

"I think just keeping focused on the task at hand," says Hogan. "Really I know it's a big stage and everything like that but really it's about getting better. It's cliche around here we talk about it all the time. Everyday every rep, every game. Hopefully we're going to bring our best game and that's all we can ask."

The Horses and Blue Devils will face-off at noon on Sunday at the Carrier Dome for the Class B State Championship.