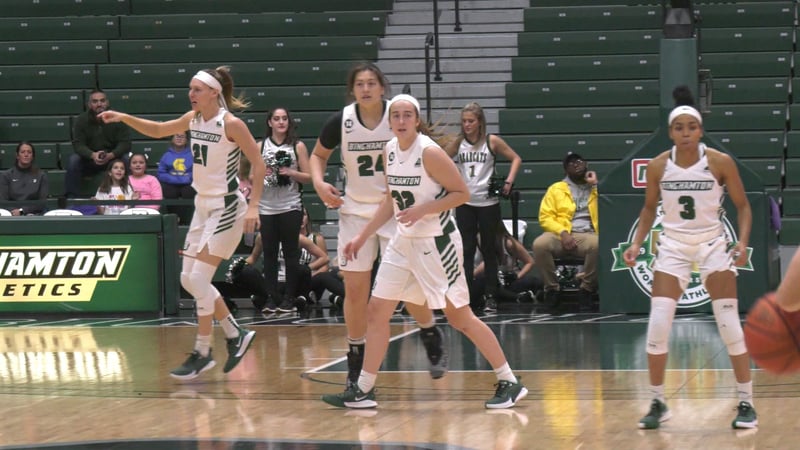 The Binghamton university Women's Basketball team is off to a 6-0 start coming off a road trip where they knocked off Delaware State and Fairleigh Dickinson. Second year head coach Bethann Shapiro Ord has been seeing major contributions not only from her returning players, but from her freshman class that features 6 first year players. Coach Shapiro Ord says much of their early season success is due to their intensity in practice.

"How hard we compete in practice. How no matter what whether it's the starters against the second team or we mix the teams up, they always compete and they always go hard," says Coach Shapiro Ord. "The ones that don't come out on top get so frustrated and mad and it's great. it's always competitive and I think that's been helping, obviously it carries over on the court."

The leadership on the court from senior guards Kai Moon and Carly Boland have also been a big part of the team's success. Moon scored her thousandth career point Saturday, is 4th in the nation in scoring and has been named America East Player of the Week for 2 out of the first 2 weeks. Boland is second on the team in points and leads by a wide margin in assists. The dynamic duo agree that ball movement has been one of their biggest improvements this season.

"We try to penetrate gaps, get 2 to play 1, hit the open person, it's really simple basketball," says Moon. "Once we do that we can do one more pass and get an even better shot off of a good shot. When we space the floor like we've been practicing, we really stress spacing the floor in practice. It makes things really easy it opens up a lot."

"I think we take care of the ball pretty well," says Boland. "Coach has emphasized not turning the ball over. In reference to our assists look for the open person, make the extra pass. It helps that the person we're passing to makes the basket so i think that keeps our assists up."

The Bearcats will look to maintain their perfect record on Wednesday as they welcome Saint Bonaventure into the Events Center for a 1pm tilt.