Sabers Quest for Another State Title Continues vs Southwestern 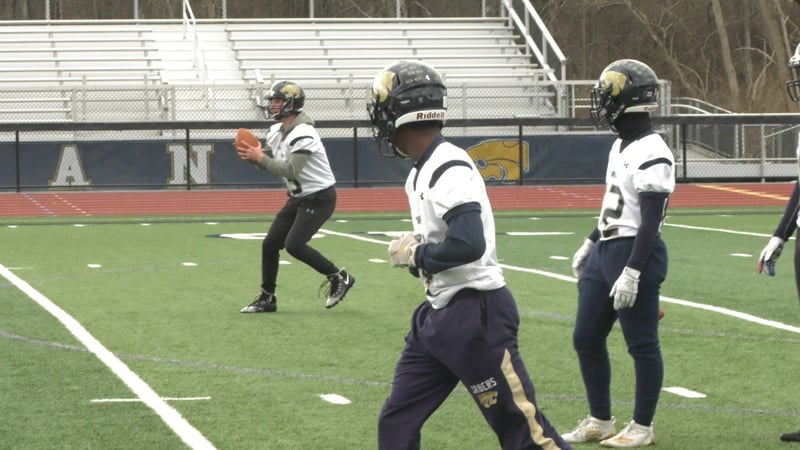 The Sabers punched their ticket to the State Semi's with a close win over Lowville on Saturday 44-36. It was a back and forth affair all game. With time winding down in the 4th, the Red Raiders were driving to tie the game when Jahreed Isles made an incredible interception in the endzone to seal the win for Susquehanna Valley.

"Dream about it a lot of the times actually," says Isles. "Just making one of those really big plays and just everyone celebrating and hearing all the fans cheering for you and all that. One of the best feelings I ever felt honestly. It's just wild I don't even know how to really feel yet."

Sabers Head Coach Mike Ford says plays like Isles game sealing pick is why that nail biter win against Lowville will help them moving forward. He says it was a great learning experience having to play a team as talented Lowville which forced the Sabers to make big plays down the stretch. Ford says they have their work cut out for them in the Semi's against Class C's second ranked team, undefeated Southwestern out of Section 6.

"They've got a lot of athletes," says Ford "We watched them play Cleveland Hill last year and thought they were a very balanced team. They got 2 senior transfers this year that are very athletic and help their team a lot. A big runningback that we got wrassle in, he's very strong and very fast and they like to feed him the ball. But they're also very balanced they can throw the ball as well so it'll be a good test for us."

To make a second straight trip to the Carrier Dome for the State Championship, junior runningback Logan Haskell and Coach Ford agree on what their key to victory over the Trojans is.

"Probably defense first. Our offense has been doing pretty well we just got to stop them on defense," says Haskell.

"I think the keys are to be on disciplined defense," says Ford. "We need to do our thing 11 guys on every play. Taking care of the football, last week we did that. And force some turnovers, we have noticed that they are susceptible to turnovers. Get the battle of the ball and more for our opportunities offense."

Kick-off between number one ranked Susquehanna Valley and number 2 ranked Southwestern in the Class C State Semi-Finals is set for noon tomorrow at Cicero North Syracuse.