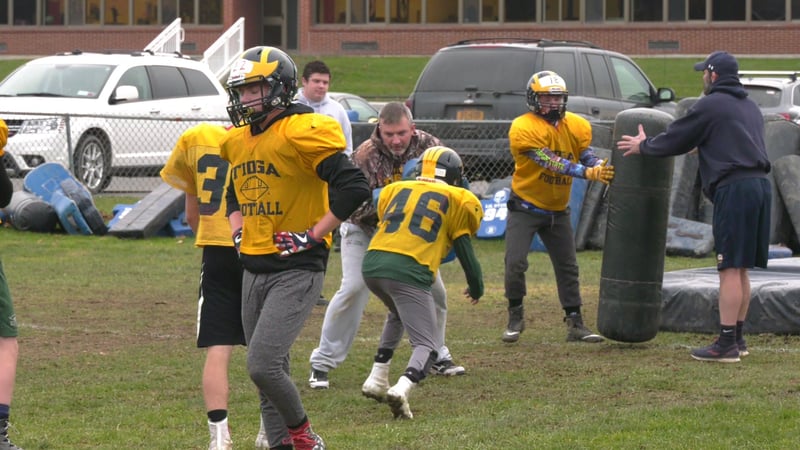 Tioga punched their ticket to the semi's with a dominant win over Frankfort-Schuyler in the quarterfinals Friday night 43-20. Tigers head coach Nick Aiello says they were able to execute their gameplan very well. He said the offensive line did a great job of opening up holes and the defense bent but never broke. Aiello says their biggest challenge of the season comes tomorrow against the Clymer Central/Sherman/Panama Wolfpack.

"Clymer/Sherman/Panama they're a heck of a ball team," says Aiello. "They're the returning state champs and we just happen to be ranked number 1 and they're number 2 but really that means nothing. They were able to avenge an early season loss and you can tell that they've gotten better all year long. They're well coached up and their offense and defensive schemes fit the personal really well. They're loaded in the skill positions and their line is doing a lot of good things so it's going to be one heck of a test for us."

En route to the Wolfpack's Class D State Championship last season they knocked off Tioga soundly in the semi's 54-19. Senior quarterback Brady Worthing says it's a game they all remember well. He says it has motivated them to improve but Aiello adds that the Tigers are maintaining their focus on their goal.

"For us returners it brings something back just knowing we have a second chance to beat them," says Worthing. "This time I think it's going to be a lot better."

"I talked to the boys about revenge I kind of hate the word," says Aiello "When you focus on revenge it kind of blinds you to what's important."

Worthing and sophomore runningback Emmett Wood both agree that this year's team is better and more prepared for the challenge ahead.

"I just think we all trust each other a lot better than past teams that we've had," says Wood. "I really think that's going to help us out."

"We got a lot of different players," says Worthing. "We have more skill players and we're able to get more big plays on teams."

Tioga and Clymer Central/Sherman/Panama will square off tomorrow night at Cicero North Syracuse, kick-off is set for 5pm.