M-E Field Hockey Celebrates Back to Back State Titles 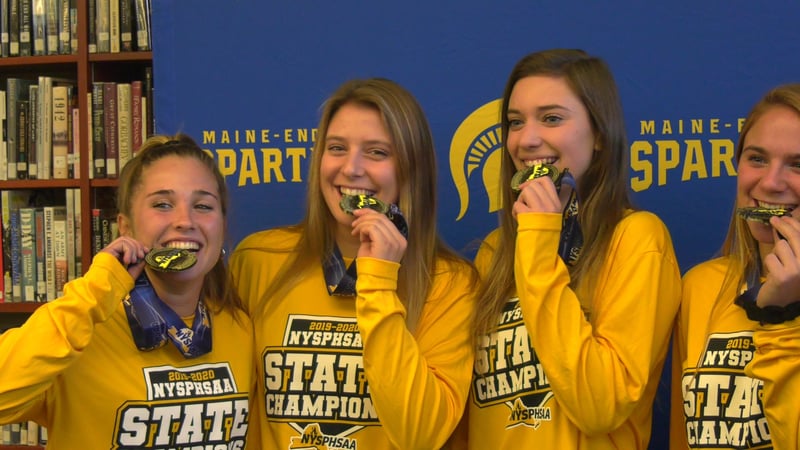 Maine-Endwell captured their second straight Class A Field Hockey State Championship Sunday after knocking off unbeaten Horace Greeley 2-1. Many of the key players from the 2018 team were a part of this title as well only losing 2 starters from last season. Head Coach Heather Doyle and Senior Anna Castaldo, who is committed to play field hockey at the University of Maryland, agree that the experience gained from last season was a big help with this season's run. They say that the team's continuity mixed with their work ethic were the key ingredients to their success.

"Hard workers. Not only do they work hard in practice every single day but in the off-season there a re a number of them that are year round field hockey players," says Doyle. "If they're not year round hockey players than I got multi-sport athletes that are super talented and helped us reach this level."

"Something special about us is just that we work really hard together," says Castaldo. "I think our team chemistry is really really good and we're all really close friends on and off the field and I think that translates into our play."

Senior Sam Palmer and Junior Jenna Zunic explained what the feeling was like when hit that they had just captured another state title.

"Honestly I feel like it kind of starts when there's like 10 seconds on the clock," says Palmer. "Everyone is just checking and watching it count down and you just get that adrenaline rush and you look around at all your teammates faces and you're just like oh my gosh we did it again and it's crazy."

"It's an unreal feeling honestly," says Zunic. "You just look around at all your teammates and it's like we did it."

While every player on the Spartans worked extremely hard to help the team capture another championship, senior forward Mary Cook can definitively say she left more on the field Sunday than anybody else.

"So this weekend during the state championship game I got hit with a stick in my tooth," says Cook. "So it chipped and honestly its worth it."

Cook had her fill of chips between the tooth chip and state championship, but didn't hesitate when deciding which chip had more of an impact on her life.

While they'll be losing more than 2 starters this off-season, only time will tell if Maine0Endwell will be able to make it a 3-peat in 2020.