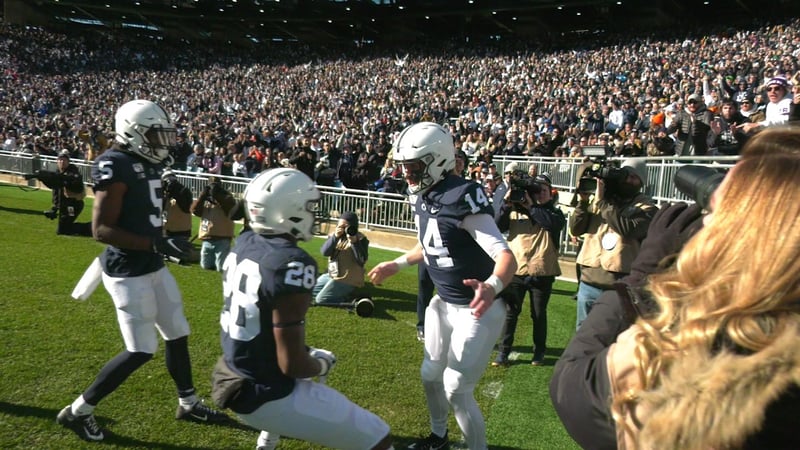 UNIVERSITY PARK, Pa. – Quarterback Sean Clifford was responsible for three touchdowns and running back
Journey Brown rushed for 100 yards and a touchdown to lead No. 9 Penn State to a 34-27 win over No. 24
Indiana Saturday afternoon in Beaver Stadium.

Clifford finished with two rushing touchdowns and one passing, while totaling 174 yards through the air on 11-of-
23 passing and 55 more yards rushing on 10 attempts – including a 38-yard touchdown run in the first quarter.
Brown rushed for 100 yards on 21 carries and scored on a 35-yard touchdown run in the third quarter.
Indiana was led by quarterback Peyton Ramsey, who threw for 371 yards and a touchdown on 31-of-41 passing
and also rushed for two touchdowns. Wide receiver Ty Fryfogle caught five passes for 131 yards and a
touchdown.

Penn State and Indiana combined for 31 points in the first quarter and the Lions added a field goal for a 20-14
halftime lead. After Brown's touchdown and a Hoosier field goal in the third quarter, Indiana pulled with three
points with a touchdown with 10:45 left in the fourth before Penn State's lengthy drive closed out the game.

How It Happened:
The Nittany Lions took the lead first after Jan Johnson recovered a muffed punt at the Indiana 27-yard line,
leading to a 12-yard touchdown reception by tight end Nick Bowers.

Penn State extended its lead early in the second half after Garrett Taylor and Antonio Shelton halted an Indiana
fake punt attempt at the Indiana 40. Brown rushed for 5 yards and then sprinted 35 yards into the end zone for
27-14 lead.

Indiana cut the deficit to three points with a 25-yard field goal late in the third quarter and a Ramsey touchdown
run early in the fourth quarter.

The ensuing Penn State drive sealed the game though, as the Nittany Lions used 9:01 of clock and converted two
critical fourth downs to keep the drive alive. The second of those conversions was Clifford's 1-yard score.

Up Next:
Penn State visits No. 2 Ohio State next Saturday at noon on FOX.