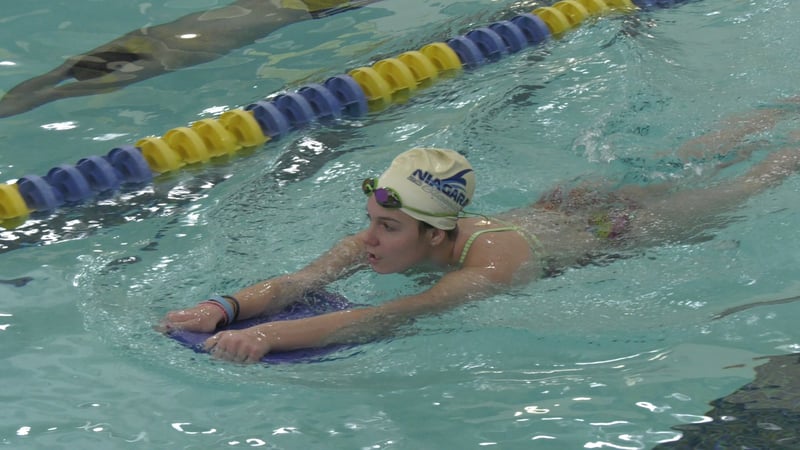 It's an impressive feat when any high school swimmer qualifies for the State Championships. It's extremely impressive when you qualify for 5 events. What's almost unheard of is to qualify for 5 events as a sophomore. However that is exactly what Maine-Endwell sophomore Maria Pignatelli has done. Pignatelli qualified for the 200M Individual Medley, the 100M freestyle, the 50M freestyle, the 100M breaststroke and 100M butterfly at next week's New York State Finals. She is only able to compete in two however so she will be competing in the 100 meter freestyle and breaststroke. While her coaches including varsity swim coach Andrew Krise knew she had this in her, Pignatelli says she was shocked.

"Like at the beginning of the season my Coach told me it might happen but I sorta didn't really think it would," says Pignatelli.

"What she's accomplished at this age especially is extraordinary," says Krise. "We've had some extremely talented swimmers come through here that have qualified in two individual events. Coach Verde had a great quote saying she collects them like charms on a bracelet. 5 is extraordinary."

This is not Pignatelli's first trip to states either. She has been on the varsity swim team since 8th grade. She qualified for states on a relay team in 8th grade and then for 2 individual events and a relay in 9th grade. Krise says it's been a treat coaching Pignatelli and that she can handle everything you throw at her.

"She's very very hard working. Very well respected by the swimmers on her team and other teams," says Krise. "They know her name and what she's all about. They don't necessarily like swimming against her but I think they definitely respect her very much as a competitor in the Section."

Pignatelli says her goals for states are to better her times and make it to finals.

The New York State Swimming and Diving Championships will be held November 22nd and 23rd at Ithaca College.