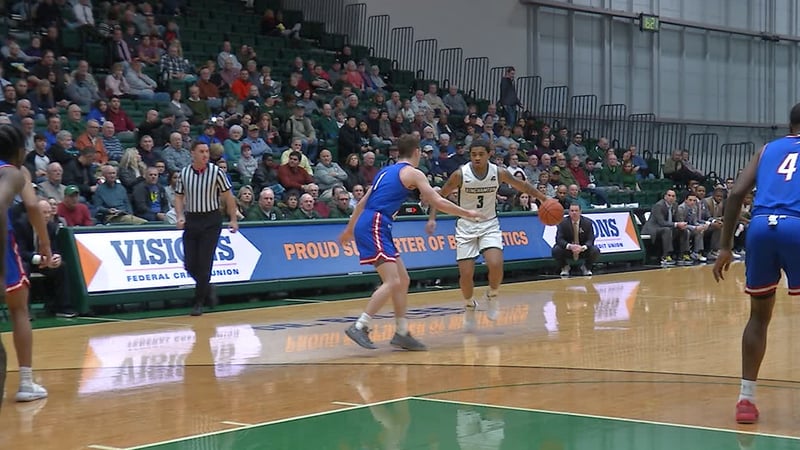 Basketball season is upon us. The Binghamton University Men's Basketball team kicks off the 2019-2020 season next week and it looks like a brighter future is on the horizon. It was media day for the team as they turn the page on last season where they finished with an overall record of 10-23, a conference record of 5-11 which was good for 7th in the America East by adding 10 new players. There was a positive ending to last season however as the Bearcats did reach their first conference tournament semi-final game since 2009 by upsetting upset second seeded Stony Brook. Coach Tommy Dempsey who is in his 8th season at Binghamton emphasized how the size added this off-season should improve their play on the boards and their increased focus on defense.

"You can't be not good on either end," says head Coach Tommy Dempsey. "I think the offense will take more time so we've spent a ton of time on defense to try and give us something that we feel like we can hang our hats on early in the year. I'll be anxious to see if that shows up when we get out there. I do think the biggest change to be the size and how much better we are defensively."

One of the 3 returners is sophomore point guard Sam Sessoms. Sessoms was a breakout star his freshman year leading the team in scoring, winning America East Rookie of the Year, and being named 3rd team All-Conference. With Binghamton featuring 5 freshman and 4 sophomores, Sessoms has had to step into a leadership role in only his second season. He says they have a young, talented, athletic team, but patience is going to be the key to their growth.

"Go out there with a clear mind and not becoming angry or frustrated with my teammates," says Sessoms. "I can't be ignorant I have to understand that they're freshman and there's going to be a lot of mistakes, I still make a lot of mistakes myself. As long as I get better at that I think I'll be able to play better games and continue to be more successful."

After the Bearcats season opener against Cornell on Tuesday they will travel to Michigan State for a tilt with the top ranked Spartans. So right off the bat we'll see where this new look Bearcats team ranks among the best in the country.