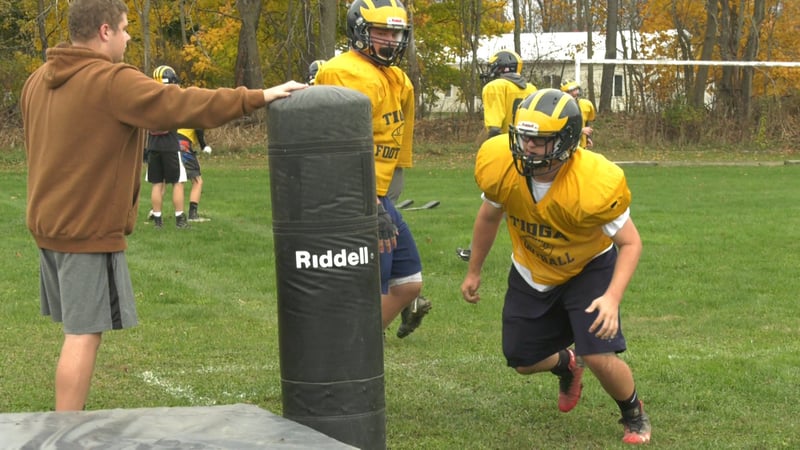 Last week Tioga’s football team capped off a perfect 8-0 regular season and currently sits in the top spot of the Class D state rankings. That however is not the headline from their season finale win. To most viewing the play it seemed like just another touchdown in Tioga’s win over Deposit Hancock on Friday. Those that know the ball carrier, senior Jared Lamb, know it was much bigger than that. Lamb broke down for me what his job is when Tigers coach Nick Aiello calls for Jared’s Dive.

“I carry the ball like this and I run fast to the touchdown,” says Senior Tight End and Defensive End Jared Lamb.

Jared has autism, but that certainly doesn’t stop him from doing what he loves. He’s been playing football for Tioga since he was in middle school and that touchdown was the culmination of his development on and off the field.

“It wasn’t anything that we told the other team about or anything like that," says Tioga Head Football Coach Nick Aiello. "We just felt that he could go in and do it. He got it on the second try. That’s all it was, nothing more than executing a play we’ve been working on.”

It was exactly how Jared wanted it, nothing fancy, just one of the guys doing his job for the team. His teammates and coaches both agree that Jared’s determination through adversity is inspiring.

“Obviously this is really special for him but it’s important for all kids to see there are no limitations the only limitations are the ones you put on yourself," says Aiello. "I think Jared is a good example of that because when he wants to do something he goes out and does it.”

At the end of the day, Jared has the same goal as the rest of his teammates.

“My favorite part of the season is winning the game,” says Lamb.

A goal Jared is helping his team reach in more ways than just scoring touchdowns.

Jared and the rest of the Tigers begin their playoff run Saturday against Delhi. Kickoff is scheduled for 3 at Johnson City.