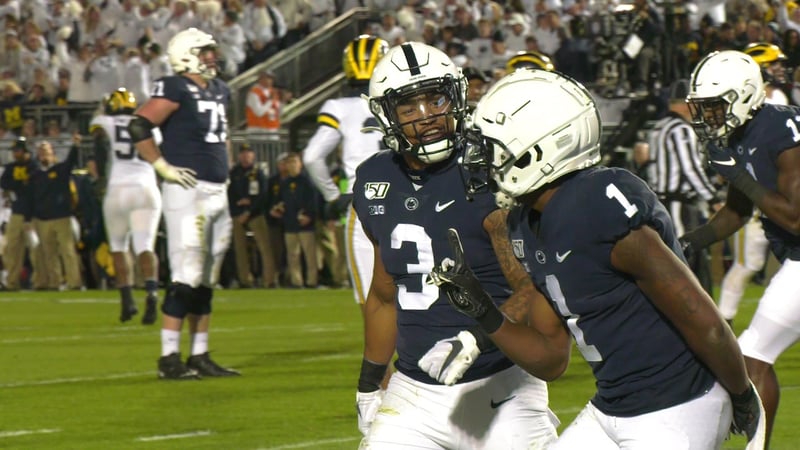 Penn State built a 21-0 lead by the midpoint of the second quarter, but Michigan rallied back and threatened to tie the game in the final minutes. However, Nittany Lion safety Lamont Wade (Clairton, Pa.) broke up a pass in the end zone on fourth-and-goal from the Penn State 3-yard line to end the threat with 2:01 remaining.

Wide receiver K.J Hamler (Pontiac, Mich.) finished with two touchdowns and 108 receiving yards on six receptions in the victory. Clifford finished with three passing touchdowns and 182 yards on 14-of-25 passing and also rushed for 17 yards and a touchdown.
Linebacker Micah Parsons (Harrisburg, Pa.) led the defensive charge with a career-high-tying 14 tackles, while linebacker Cam Brown followed with 10 and four other Nittany Lions finished with seven or more.

Cornerback Tariq Castro-Fields (Upper Marlboro, Md.) also tallied his second interception of the season.Michigan was led by running back Zach Charbonnet, who rushed for two touchdowns and 81 yards on 15 carries,and quarterback Shea Patterson, who rushed for a touchdown and completed 24-of-41 passes for 276 yards.

Penn State's first score came on back-to-back deep throws, as a 37-yard reception by Jahan Dotson (Nazareth,Pa.) down the left sideline was followed by a 17-yard touchdown reception by Pat Freiermuth (Merrimac,Mass.) on the very next play. On the Nittany Lions' next offensive drive, a 44-yard run by Ricky Slade (Woodbridge, Va.) to the Michigan 20 led to a 2-yard Clifford touchdown run and a 14-0 lead in the opening
seconds of the second quarter.

Penn State extended its lead to 21-0 following the Castro-Fields interception. Penn State started on the Michigan 49, and on third-and-3 from the 25, Clifford found Hamler in the end zone for a touchdown.

Michigan answered with its first scoring drive, covering 75 yards on eight plays with Charbonnet scoring on a 12-yard touchdown run.

The Wolverines kept Penn State in check in the third quarter, cutting their deficit to a touchdown on another 12-yard touchdown run by Carbonnet.

Penn State restored its two-touchdown lead early in the fourth quarter with a 53-yard touchdown pass to a wide-open Hamler. Michigan answered though with a nine-play, 75-yard drive capped by a fourth-and-inches quarterback sneak by Patterson.

After a Penn State three-and-out, Michigan drove 44 yards to the Penn State 3, but Wade’s breakup on fourth-and-goal ended the Wolverines’ hopes. The Nittany Lions needed just one first down to run out the clock, and Hamler secured it with a 4-yard rush on third-and-3.

Up Next
Penn State travels to East Lansing to face Michigan State Saturday afternoon. Game time is set for 3:30 p.m. on
ABC.