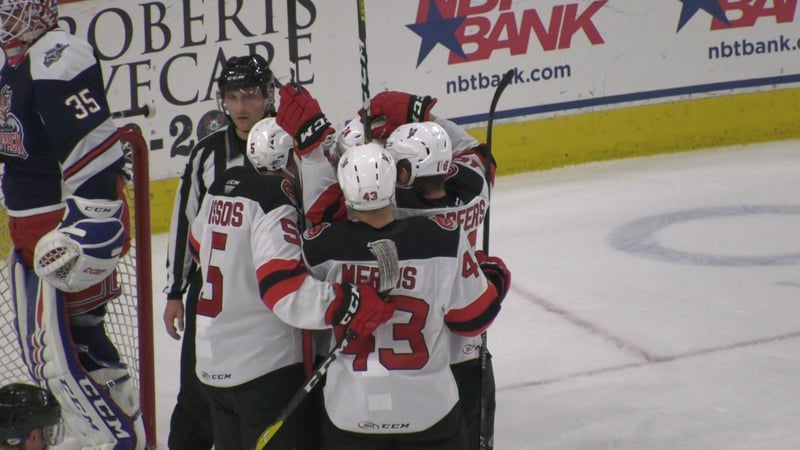 Vinni Lettieri gave the Wolf Pack a 1-0 lead just 3:03 into the game on a great shot from the right wing circle. Lettieri beat Groleau to the loose puck and lifted the puck over the left shoulder of goaltender Evan Cormier for his third of the year, unassisted.

Binghamton exploded for three goals in a span of 4:06 to take a 3-1 lead. The Devils forced a Wolf Pack turnover in the offensive zone and Ryan Schmelzer fed Marian Studenic who tapped the puck by the right leg pad of goaltender Adam Huska to tie the game. The goal was Studenic’s first of the year with the lone assist going to Schmelzer.

Under three minutes later, Brett Seney rocketed a shot on the power play to give the Devils a one-goal advantage. Seney took a pass from Joe Morrow and ripped a shot over the left shoulder of Huska for his third of the year. The power-play tally came at 12:24 of the first with helpers credited to Morrow and Joey Anderson.

After great work down low below the goal line, Ludvig Larsson slid home a Brandon Gignac feed to give the Devils a 3-1 lead at 13:45 of the first. Gignac and Blake Speers collected the assists on Larsson’s first of the year and Binghamton took that lead into the intermission.

The lone goal in the second period came just 1:54 after puck drop. Hartford came out flying and Joey Keane scored his third of the year to pull the Wolf Pack within a goal. Keane’s goal had assists from Lettieri and Mason Geertsen and the Devils took the one-goal lead to the third period.

38 seconds into the overtime period, Chytil brought the puck down into the Binghamton zone and passed it back to Phil Di Giuseppe who put the 4-3 game-winning goal past Cormier.

Cormier stopped 32 of 36 shots on goal in the loss.