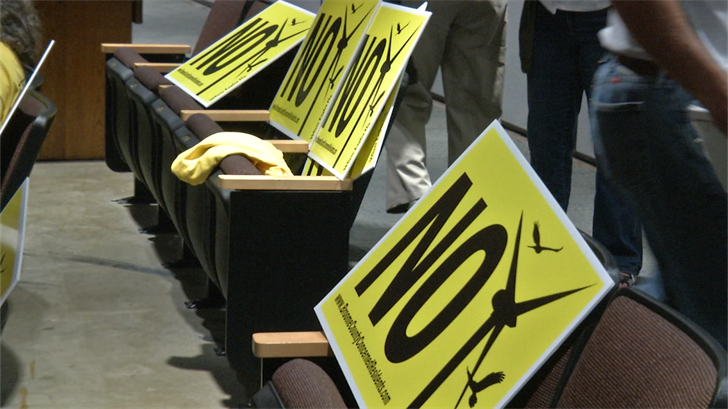 "We're trying to slow down the process of these windmills coming in," said Rose Auld, a Windsor resident.

The facility plans to operate 33 wind turbines in Windsor and Sanford that stand almost 700 feet tall, with 300 feet wide blades. These are larger than the average turbine.

"Not changes in the technology, just the addition of taller towers, addition of tower sections, and longer blades, to capture more of the winds," said Alec Jarvis, Development Director for Calpine.

"When they first came into town, people thought they were going to be just small, pretty little windmills, like you see in Holland," said Auld.

Today's statements will be considered by the New York Department of Public Service when deciding to accept or deny Bluestone Wind's application.

"The Article Ten process is what a project over 25 megawatts of solar or wind has to go through, so there's an extensive application process," said Jarvis.

Calpine, the company behind Bluestone, says if the application is approved in December, construction could start as early as January.

"All the potential impacts from the project are studied, evaluated, and then reviewed by the siting board," said Jarvis.

"Those findings were flawed; they weren't honest," said Anne Lawrence, a Sanford resident.

Many residents were wearing tee-shirts, signs, and even bumper stickers calling for no windmills. These residents have widespread concerns, including, property value...

"If we can't sell our home then we can't retire," said Auld.

"One of the high density areas here, for the golden eagles," said Lawrence. "And they want to keep the numbers that are going to be killed quiet."

"They have a doctor paid $800 an hour to say there's no health effects," said Lawrence.

"No body thought of wind energy as something being environmentally destructive, but it is. They're blasting off mountain tops." said Auld.

If built, the windmills could be as close as 1,000 feet to residential homes, according to Lawrence.

"I think Upstate New York is often seen as kind of a wasteland," said Lawrence.

Residents like Lawrence feel their concerns are being pushed aside to reach political quotas for renewable energy.