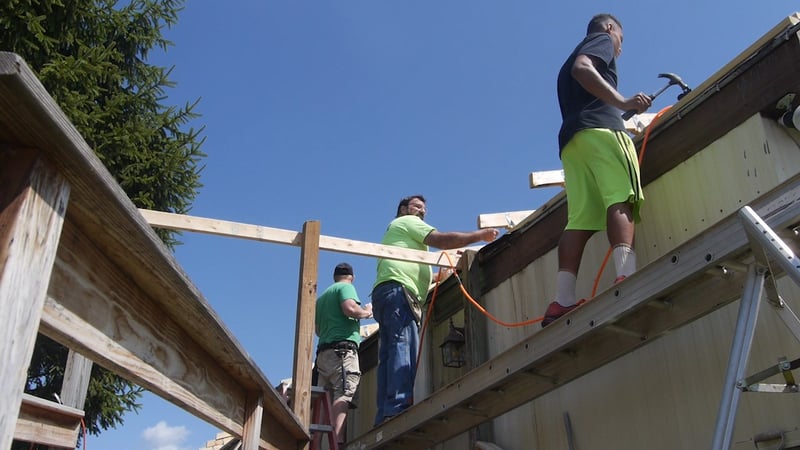 A group of community volunteers descended on Doris Hurlburt's North Street home in Whitney Point, starting work on a new roof to replace one that was leaking all over her living room. While the 72-year-old watched from the shade, friends, neighbors, and strangers picked up hammers and headed up ladders to get the job done.

"It's people coming together to help each other out. And it really does. It shows who your friends and neighbors are," says Hurlburt.

It's an effort organized and headed up by the Greene-based nonprofit organization The Impact Project. They bought the supplies and the community is supplying the labor. Hurlburt says she applied for help from The Impact Project back in May. Her roof was leaking, causing mold in her single-wide trailer home. The fire station and a church both tried to raise money to help and were able to come up with some temporary patches, but something needed to be done about getting a whole new roof. A very expensive undertaking. Living alone and on a fixed income, Hurlburt didn't know what to do. That's when she and her friends found out about The Impact Project and applied.

"We had been there, had interviewed her and wanted to make a difference," says Jim Willard, Director of The Impact Project.

But the organization didn't have the money either. Three weeks later, as Willard puts it, they "were blessed." A $15,000 grant came through from Broome County. That money came out of the rural communities fund and part of it went into getting a permanent fix for Hurlburt's roof.

When it's all said and done, about 60 people will have volunteered their time to help make sure Hurlburt can stay in her home.

Willard says The Impact Project has completed 105 projects around the Southern Tier. This will be their 106th. Willard says these projects help elderly residents stay in their homes where they want to be, at the same time, saving taxpayer dollars that might otherwise be spent on assisted living if residents can't feasibly stay at home anymore.