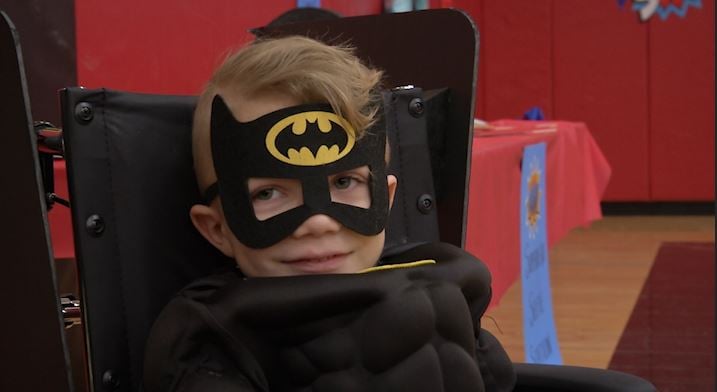 A superhero in the eyes of his community, 4-year-old boy Liam Hickey is fighting for his life.

Liam is just one of two people in the United States fighting an extremely rare skeletal dysplasia condition called opsismodysplasia and one of just two dozen in the entire world.

Opsismodysplasia is a genetic condition that causes severe degeneration of the spine and legs.

Liam was diagnosed with the condition when he was just 18 months old.

Liam's mother, Amanda Hickey said, "he's four years old but his bones are that of a newborn, “we just try to remain positive and we look for the positivity in every outcome and even if we have to go through all these downfalls especially with the surgeries lately were going to do what we need to do together as a family”.

Liam has already undergone two surgeries with the most recent being on March 1st, to rebreak one of his legs in order to help strengthen and straighten them.

Amanda Hickey says, “One of the hardest things is not knowing what to expect because there's so little information on it and to know that he's going through daily pain is hard for us”.

But Liam isn't fighting the battle alone… he has an army supporting him... his community.. and on Saturday they threw him a superhero-themed benefit to help raise money for his medical and travel expenses.

Steven Hickey, Liam's Father said, “When the community comes together it's a nice feeling… a lot of people have reached out and it does make all the difference in the world, whether its traveling, unexpected things happening, bad news, but to know we have a lot of friends and families backing us makes it easier".

If you'd like to help out the Hickey family click on the link to Liam's GoFundMe Page.