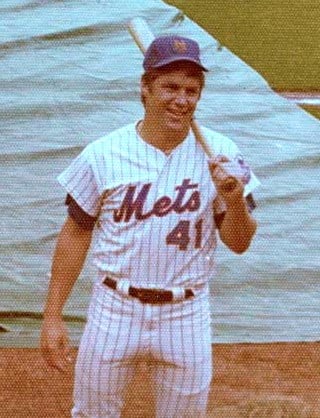 Legendary Met pitcher Tom Seaver is suffering from dementia and will not make any more public appearances, his family announced in a statement on Thursday.

His family expressed that Seaver will continue to work on his vineyard in California, but asked for privacy. The 74-year old former right-hander led his "Miracle Mets" to one of the most doubtful championships in American sports history in 1969.

Seaver is the greatest Met of all time. His storied career highlights three Cy Young Awards in 1969,1973 and 1975, as well as the National League's Rookie of the Year award in 1967. Seaver struck out nearly 4,000 batters and had a lifetime ERA of 2.86 while being selected to 12 All-Star games.

The Seaver family announced today that Hall of Fame pitcher Tom Seaver has recently been diagnosed with dementia," the National Baseball Hall of Fame in Cooperstown, New York, said in a statement Thursday.

"Tom will continue to work in his beloved vineyard at his California home, but has chosen to completely retire from public life. The family is deeply appreciative of those who have supported Tom throughout his career, on and off the field, and who do so now by honoring his request for privacy."

“We’ve been in contact with the Seaver family and are aware of his health situation,” the Mets said in a statement. “Although he’s unable to attend the ’69 Anniversary, we are planning to honor him in special ways and have included his family in our plans. Our thought are with Tom, Nancy and the entire Seaver family.”