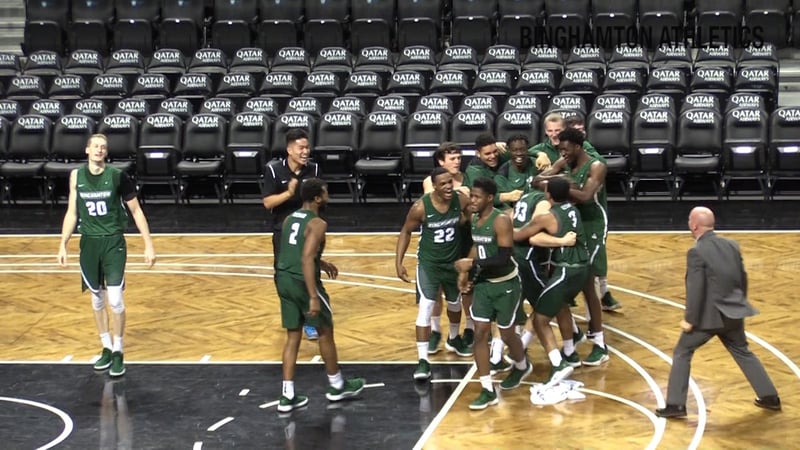 Brooklyn, N.Y. - Senior guard J.C. Show knocked down a three-pointer as the horn went off to bring Binghamton Men's basketball to a story book win over LIU Brooklyn Friday afternoon at the Barclays Center.

The Bearcats played in an NBA arena for the first time in program history and just three days after LeBron James and the Los Angeles Lakers faced the Brooklyn Nets on the same floor, BU battled for a full 40 minutes before orchestrating the story book finish.

The Bearcats trailed 67-64 when Show was fouled and went to the line for a 1-and-1 with 2.6 seconds left. He made the first shot, intentionally missed the second off the back iron and the ball deflected out of bounds off an LIU defender, giving BU the ball underneath the basket, down 67-65 with 1.1 seconds left. Freshman guard Sam Sessoms inbounded to Show in the right corner and the captain swished the game-winner at the buzzer - his fourth three-pointer of the half.

Binghamton trailed by as many as 12 points and were down 62-54 with 1:58 remaining before staging its final rally. Senior forward Chancellor Barnard made a pair of free throws with 1:41 left and frontcourt mate Caleb Stewart drilled a three from the top of the key with 1:23 left to make it 62-59. Long Island made two free throws with 0:53 left to build its lead back to five but Show answered with a three-pointer with 0:41 left to bring it back to 64-62. The Blackbirds hit a jumper with 13 seconds left but senior guard Everson Davis answered with a tip-in with six seconds remaining. Down 66-64, BU fouled LIU with four seconds left and the hosts made just one of two, keeping the Bearcats' chances alive. On the ensuing inbounds, LIU intentionally fouled Show to avoid a potential game-tying three. But the strategy backfired as Show scored four points in the final two seconds to steal the win.

Barnard led four BU players in double figures with a career-high 18 points - 10 in the second half. He added seven rebounds and three blocks. Show wound up wth 15 points - 13 coming in the decisive second half. Davis finished with 13 points and Sessoms added 11 points and six assists.

The Bearcats struggled to 27 percent shooting in the first half and trailed 30-20 at intermission. But they answered with 48 points in the second half on 56 percent shooting.

Binghamton next travels to Ann Arbor to face No. 4 Michigan on Dec. 30.