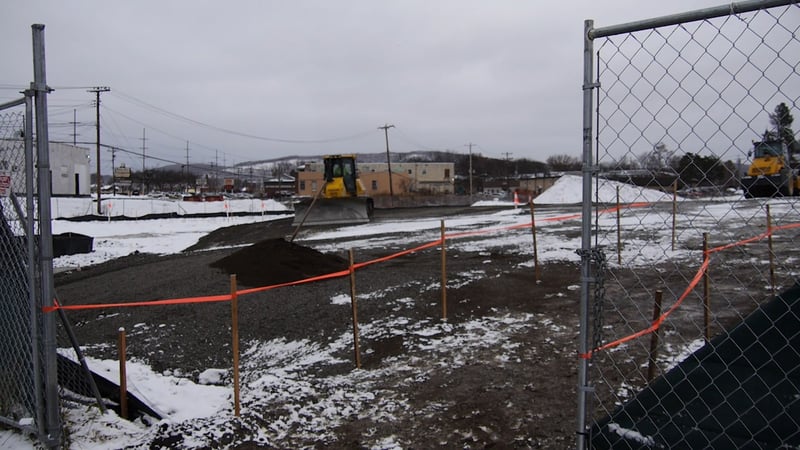 Work has officially begun on the Canal Plaza housing complex on Binghamton's north side. Crews broke ground on Wednesday morning on the $20.5 million project that, when complete, will include 48 affordable housing units, 12 of which will have supportive services for the mentally ill, and 15,000 square feet of commercial space.

"I don't think anybody can tell you the last time there was new construction of this magnitude on the north side or even the city as a whole," says Mayor Rich David.

It's a project that's been in the works for around four years, but the conversation about the need for safe, low income housing has been going on for that long if not longer.

"It's really a basic need," says Broome County Executive Jason Garnar, ""This is going to bring 48 units of affordable and safe housing to a community that quite frankly needs it more than any other community that I know of."

The apartments will take up about half of the four acre site, which used to be the home of Big Lots. The building was abandoned and the county seized it for back taxes. The city bought the lot from the county for $1 in 2015. Since then, there have been plenty of steps to get it ready for Wednesday's groundbreaking. The building was demolished last September and then there was environmental cleanup on the site. Once all the funds were secured, the project moved forward.

That $20.5 million is coming from a variety of sources. The breakdown is below.

David sees this as the start of revitalization in the north side neighborhood he says has been historically "neglected." In addition to housing, another much talked about need for this area of the city is a grocery store. When asked by Fox 40 if David sees this housing project generating interest from a grocery chain, he answered: "All I can really say on that is in the next few weeks we may have more announcements about what's going on at this or other sites on the north side."

The apartment complex is expected to be complete by 2020. Catholic Charities has signed on to lease one of the commercial units and the city says they do have other interested parties.