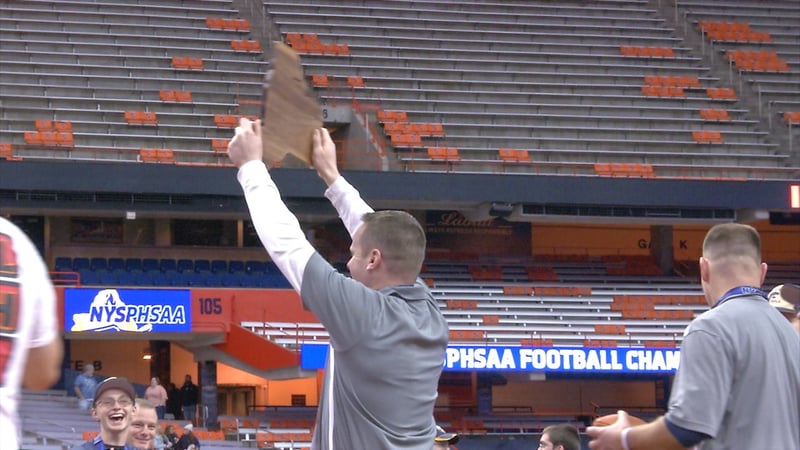 Conklin, N.Y. - It's been four days since the Susquehanna Valley Sabers historic season came to an end, where they left the 2018 season as Class C State Champions. Something the Sabers football program has never done and they did it with unbelievable numbers. Throughout 13 games, SV scored 614 points, allowed 106 points and didn't lose a single game. Someone who had a pretty big part in that success was the State Championship MVP, quarterback Jared Freije.

Back in August, coaches and players expressed that their goal was to win a state title and they also expressed how realistic it was.

"We thought it was a realistic goal when we were in Class B to make a strong run and then moving down to Class C, it made the dream more clear to us. We worked harder, practiced harder and made sure that dream became a reality" said Freije.

A dream that turned realistic right from the beginning of the season. The Sabers weren't just winning their games but absolutely dominating them, averaging 47 total points  a game and allowing just 8 points.

"It's a little bit surprising but we weren't that surprised because we know how hard our kids work. We knew if we came out and did what we were supposed to do and what we wanted to do, that we would dominate teams" said Frejie.

Just like any high school athlete or any athlete in general, it's difficult to stay in the moment and not look towards the bigger picture. In this case, the bigger picture of course was the state championship game, but just like any good team, the focus is never ahead but always one game at a time.

"It wasn't difficult for us. Every week we focused on one team, watched film on one team and made sure our game plan was crisp for that week."

"We would play a game and go back on the bus and the mindset would be on the next game."

Eventually that next game was the semi-finals game. A game where Jarred left in the second quarter due to a concussion and never returned. A game that gave the Sabers more adversity than they had been dealt with all season.

"My team put all they had on the line, they went through so much adversity. It was a difficult game to win. So, to win through that really showed that we can accomplish anything if we just put our heads down and work hard."

The Sabers certainly showed they could accomplish anything after beating Dobbs Ferry 27-6 crowning them the Class C State Champions. Seventeen seniors, including Jarred Freije will close the chapter in their Susquehanna Valley football book, leaving with memories and lessons they'll cherish forever.

"Just respect the game. Work hard. Don't complain or get down on yourself or your teammates. Love each other and work hard for each other, it's all you have in high school really" said Freije.