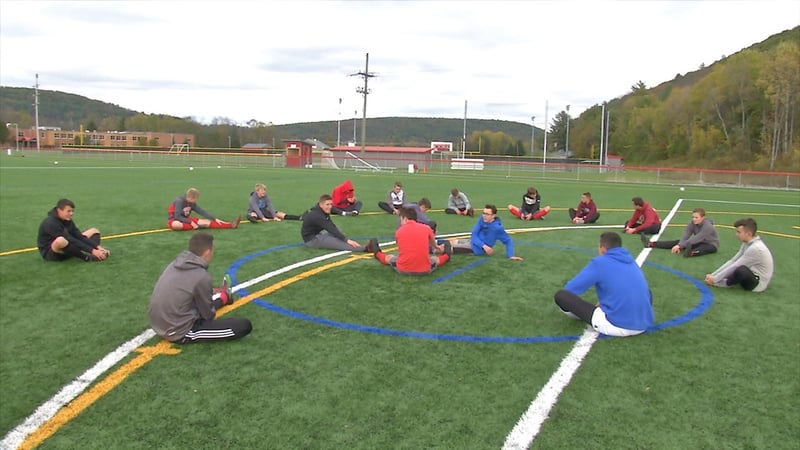 Binghamton, N.Y. - The Chenango Valley boy's soccer team is on route to making program history. The Warriors haven't made the Section IV Class B finals since 1999 and the last time they won? Well, never. However, all of that can change on Saturday when the Warriors take on No. 1 seed Oneonta Yellow Jackets in the Class B Championship game.

But, this 2018 Warriors team isn't your typical team led by several seniors. In fact, only two seniors lead the way while 17 underclassmen follow in their footsteps, 15 of them freshmen and sophomores. Although this team may lack in experience, their heart and their work ethic make up for it.

"It's not a difficult job motivating these kids to come out and play" said first year, head coach Ted Hoffman.

"There are some young leaders that step up. I think the humility they have is excellent. They appreciate the effort they put into it."

"We really have the work ethic. It's a team, collective effort. It's not just one us going around and doing it by ourselves" said Junior, Zachary Crooks.

If the Warriors take home the victory on Saturday they will finally be able to add to the two boards hanging outside their gymnasium. Two boards that consists of Chenango Valley's boy's and girl's championship titles and boy's soccer is the only team with an empty spot.

"I  visit it often. It's my dream to put numbers up there and make soccer recognizable at this school" said Freshman Aidan Marroquin.

"I've done it a couple times honestly. I did that last year as well. I really want to get a number on that board" said Crooks.

The Chenango Valley Warriors travel to Oneonta on Saturday to face top seed, Oneonta Yellow Jackets for the Class B Championship game. The time is to be announced.