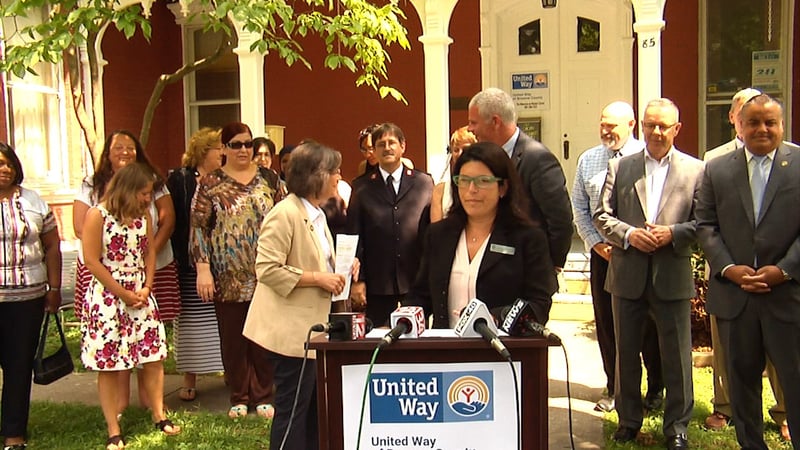 Over $900,000 in New York State funding was awarded to the Southern Tier, Monday, in an effort to fight the rate of poverty.

Binghamton and Broome County leaders met on the lawn of the United Way on Walnut St, Binghamton, and announced 12 local organizations had been the recipients of the nearly $1 million in funds secured from the $25 million Empire State Poverty Reduction Initiative (ESPRI).

United Way of Broome County Executive, Jacqueline Gerchman, said committee members of the Binghamton-Broome Anti-Poverty Initiative (BBAPI) were tasked with focusing efforts in the City of Binghamton, where poverty rates are the highest in Broome, and helping to end the challenges people in poverty faced.

And in an effort to understand the barriers low-income families face daily, Gerchman said the committee seated local residents who are themselves facing poverty hardships. Josephine Burrell lives in Binghamton and said she has faced many challenges due to low wages. That's why she said she had to have a seat in the BBAPI, to give a first-hand perspective on what it will take to change Binghamton's poverty line.

"Having a minimum wage job is not enough to support one's self or one's family," said Josephine. Burrell added that many people she has known face the common hardship of living in poor or sub-standard housing units. And due to paying rent to landlords that rarely spend any time or money on fixing the poor housing, she said many people use what little money they have to fix their dwelling or move to another low-cost area and repeat the cycle.

"We have people going from place to place because they can't find a decent place to live. It's not fair the children in school because it interferes with their friendships," said Burrell.

One way, Burrell said, the new funds could help lower poverty in the area is by giving residents a chance to build small, affordable housing projects through the Broome-Tioga NAACP Economic Development.

Sending underprivileged individuals to learn carpentry, welding, electricity, and other trades, said Burrell, we can have these people build small homes for our poor. Because most big contractors won't spend time on building something not so profitable, she added, but most people don't care about the size of a home, just a roof and a place to live.

Other BBAPI committee members believe poverty and gainful employment can be correlated to the rising costs of transportation and child care. By awarding monetary advancements to Mothers & Babies Perinatal Network and other area services, BBAPI chairman Mark Bowers said the $900,000 is a great start to ending poverty in the Southern Tier.

The following organizations were each rewarded part of the over $900,000 in State funds: