Protesters Show Rep. Tenney and Rep. Nunes How They Feel 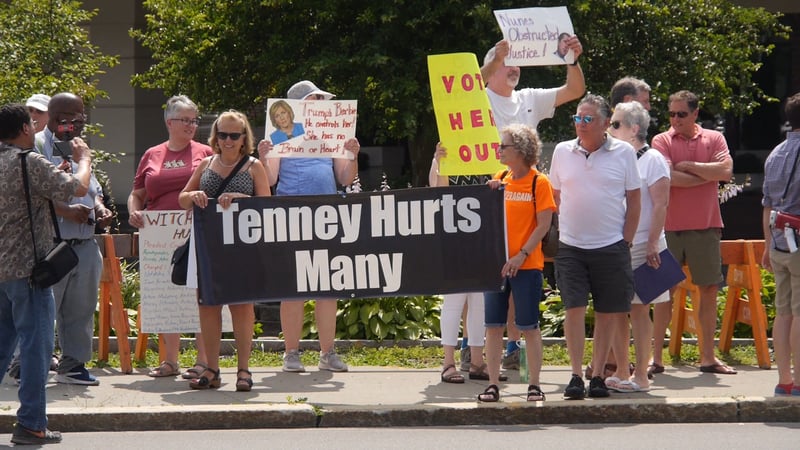 The protest, organized by Indivisible Binghamton, is meant to highlight “Tenney’s allegiance to the Trump administration’s agenda despite the negative impact it has on her district”, according to the protest mission statement.

Rep. Tenney is the elected official to the House of Representatives for the 22nd District of New York, which includes Utica, Rome, Cortland, and Binghamton.

Rep. Nunez is a congressman to the House of Representatives for California’s 22nd district, as well as the chairman of the House Intelligence Committee.

Matthew Wahila, volunteer and organizer for Indivisible Binghamton, said “We let people know what Claudia Tenney is doing because a lot of people don’t know. People who aren’t as engaged with politics don’t know all the horrible votes she is making. How she’s voting to cut back healthcare rights, to repeal the ACA, to allow people with pre-existing conditions to get charged more for insurance. Voting to let coal companies dump waste into our water.”

Event organizers say that over 100 protesters came mostly from the Binghamton area, but that they had reports from people traveling from as far away as Rome and Utica, over 2 hours north of Binghamton.

George Yenchak, veteran and protester, said “My family is so upset over what’s going on in this country. There seems to be a callousness for democracy and that’s why we are here. We think these Republicans.. There’s Republicans I like but.. These two in particular I don’t think are representing us.”

What follows are some chants that were lead by Indivisible Binghamton:
“Say it loud, Say it clear
Tenney and Nunes are not welcome here”

(To the tune of Sitting In a Tree, K-I-S-S-I-N-G kids rhyme)
“Claudia Tenney, where have you been?
What’s your excuse? Your political spin?
We beg and plead.
We write and call.
You still won’t give us a real town hall.

Tenney and Nunes in DC,
Selling out their constituency.
They collude and cheat,
And gerrymander,
Attack us with their lies and slander.

Tenney and Nunes in the Holiday Inn,
Raising dirty money to help them win.
They raise and raise,
Spend even faster,
Beholden to their corporate masters”